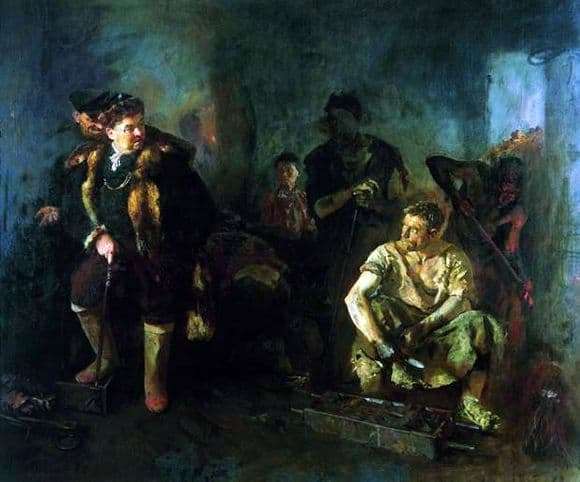 In 1937, Boris Ioganson finished work on one of his best creations – the painting “In the old Ural factory.” Her theme was relevant and hotly debated at the time. The canvas was devoted to exacerbating the confrontation of classes in society.

The artist set his goal to show the severity of working conditions, the intensity of labor and the difficult lives of ordinary workers. To this end, the master made a trip to the Ural mountains, visiting the largest centers of production and coal mining. Johanson read a lot of specialized and fiction literature, talked with local residents, watched and drew conclusions. The idea of ​​the painting was born after arriving at one of the factory premises of Sverdlovsk. The old workshop rather looked like a prison. He was gloomy, devoid of lighting and amenities. The shed became the place where the action of the picture unfolds.

One of the central figures of the canvas – the owner of the foundry. The clerk of the production whispers something in his ear. Their views are directed to the worker, who is trying to awaken in his comrades the desire to live and fight. A man is well aware that his thoughts are unpleasant and can cost him his life. Against the background are a few more workers. A tired old man who understands the full horror of his position and the need to change life. To his right is a deeply drinking, dirty man. Hard labor broke his core and eradicated the man in it. Completes the picture of the little boy who helps workers. He is thin and weak. This company is devoid of energy, which is so necessary to protect their rights.

The masterpiece has clarity, specificity and accuracy. There is no hidden meaning in it according to the idea of ​​the author. “At the old Ural factory” is a sharp and topical work. The picture deservedly takes place among the brilliant Soviet works.