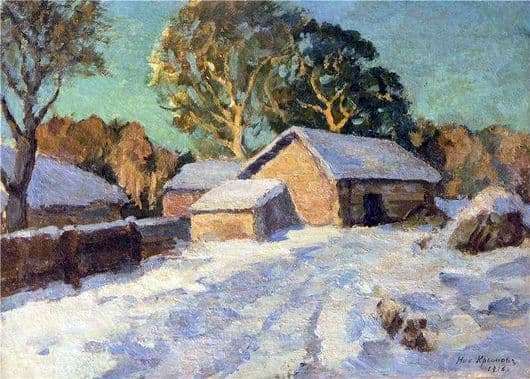 The painting “Landscape” by artist Nikolai Petrovich Krymov, written in 1916, depicts peasant huts against a cloudy sky. Reviving the canvas attached trees in the background. It would seem that a simple plot does not arouse any feelings. The poor village lifestyle attracts with its hopelessness with simplicity and commonness. And although the picture is written in bright colors, it looks bleak. Maybe due to the lack of images of people on it.

Sunny summer day, the cloud in the background, repeating the outlines of a stack of straw makes you think about the frailty of the world. It is not by chance that the author uses a palette of yellowish hues in the foreground. The brightest spot in the picture is this particular stack. The image in the picture is a bit blurry. Through the prism of sunlight there is a midday heat. The houses are also depicted in soft colors.

who can convey the most subtle colors of summer nature. This picture can be called a model of landscape painting. It is no coincidence that students of art schools comprehend the skill of writing a landscape precisely for this picture.

At the beginning of his career, Krymov was very poor; he had to paint with paints, which were scraped off from his canvases by better-off students. And throughout life, the artist was characterized by minimalism in the images. But it was precisely from this that his paintings were smoothed out more transparent, unobtrusive, they felt the soul of the artist. The poet of the landscape was so called by his contemporaries. So call him and those who get acquainted with his work today.