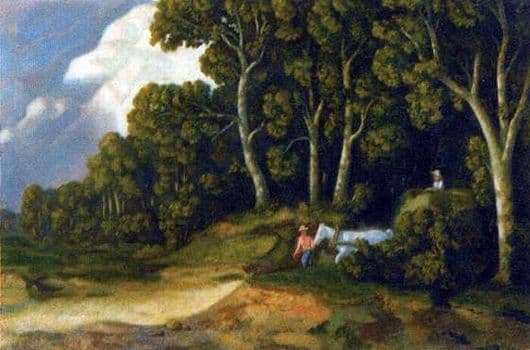 Nikolai Krymov entered the history of Russian art not only as a brilliant landscape painter, but also as a teacher and theorist of painting. Born in the family of artists. Naturally, the father became the first teacher of Krymov.

At the beginning of his studies, Krymov was so poor that he could not get paint on himself and used those who scrubbed richer students from their canvases. This developed in the artist thrift to the consumption of paints and drawing preferably on small canvas. Despite all the machinations of fate, Krymov’s talent developed quickly, and one of his first paintings was bought for the Tretyakov Museum.

The artist’s works are distinguished by fading colors, which absolutely does not spoil the picture, but on the contrary, adds some poetic spirit to it. The artist’s performance is always very clear, much attention is paid to the details, all the strokes are thorough and precise. Krymov

loved to write nature, especially water and reflection in it, when the impression of a split world appears, when the sky merges together with the earth.

Especially sensual Krymov depicted landscapes. For example, the painting “From the Forest”: the nature in the picture seemed to stop. Thus, the artist conveyed his contemplative poetic mood and his observations.

In the early works of Krymov, the influence of various masters can be seen, but later on, it is noticeable that alien motives and stylistics are alien to him. He never pursued fashion trends, but the main thing for him was always a sensitive emotional perception of nature.

Such honesty and sincerity in the works led to Krymov quite a few students, to whom he conveyed his manner and sensuality of performance. Even more followers became interested in an interesting and unlike any other manner of Krymov’s performance. Many imbued with his honesty and the fact that he always remained true to himself and nature, and not to fashionable trends or the manner of writing famous artists.