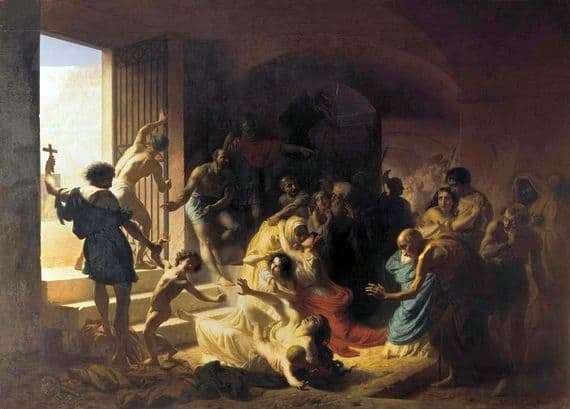 The picture is painted in oil on canvas in 1862. Genre – historical.

Flavitsky Konstantin Dmitrievich is a Russian artist of the mid-19th century. He lived only 36 years, but in his small creative career he created masterpieces of world painting. The artist died from consumption, leaving his artistic legacy.

For his work Flafichesky awarded honorary titles. The artist became famous for his colossal works, which he wrote on motives from Christian sources.

“Christian Martyrs in the Colosseum” is a masterpiece of historical genre. The canvas was created in Rome. Now it is in Petersburg.

The picture shows the martyrs who will soon be executed for their faith by the Roman authorities. In the third, fourth century in the Roman Empire, it was nice to gather people for the public execution of all the perpetrators. Especially the Colosseum was overcrowded when Christians were executed. All the martyrs who accepted the faith and the cross, the emperor threw at the mercy of the hungry Lions.

There was no mercy for anyone: neither for women with babies, nor for old men. But the true martyrs who believed in the power of the cross and savior bravely accepted the terrible reality. Indeed, after this, their souls were saved. The canvas of Flavitsky makes us think about what people were ready for for God’s sake at the beginning of time. To accomplish their feat in life everyone has to and it is different.

The picture so skillfully conveyed contrasts shades. One of the first followers of the Christian religion is waiting for execution in this dungeon. The door is already open, and this means that soon the martyrs will face a cruel reprisal.

The Colosseum could put in itself 78 thousand spectators, who eagerly demanded execution, but gradually in Rome they began to realize that this entertainment was cruel and disgusting. By the end of the fourth century, the execution of Christians ceased.

The canvas is stored in the State Russian Museum. St. Petersburg.