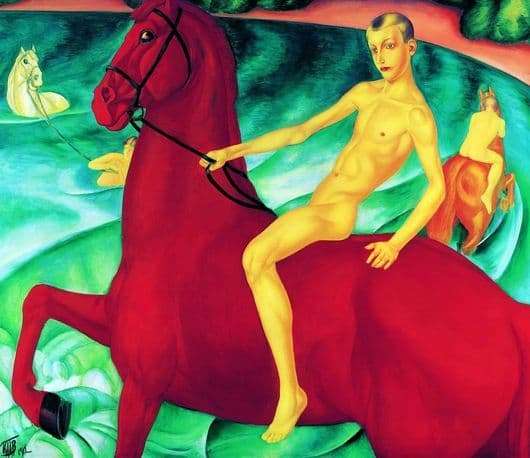 Petrov-Vodkin’s artistic work entitled “Bathing a Red Horse” stands out among his other paintings at least in that it was known to everyone in Soviet times. And this is the era of the unconditional triumph of social realism! This picture is impressive in scope and brightness of colors. The color selection is built around the contrast of red and blue. Also noticeable is the typical flattening of forms for symbolism, along with filling most of the canvas with the same tone. The process of horse bathing is a common situation for the Russian life of that time, and therefore a fairly common subject in the painting of that time.

Russia is often associated with a horse, its history – it is enough to recall the notorious “bird-three” of Gogol or the “steppe mare” of A. Blok. The crimson horse in this picture is understood by the viewer in the same way – as an allegory with Russia, escaping from the hands of a young rider, barely coping with the reins. It is worth adding that the color of the horse is not a reference to the Bolsheviks who won in 1917. In fact, this color is a symbol of aggression and danger. In addition, “red” is the archaic form of the word “beautiful.” The fact is that the artist often used in painting techniques and color solutions characteristic of Russian icon painting. The plot, color and compositional center of the picture is certainly a horse. It is so huge that it is not even visible at full height, it simply does not fit on the canvas as a whole. He literally radiates power.

The fiery-red, blood-red horse in this picture makes it completely unreal. It is as if he consciously allows the rider to hold on to himself. His pupil, looking towards the viewer, creates an unusual feeling, as if the animal is thinking of something unthinkably important, as if he knows something very significant, but we humans are not able to hear it. A young guy with no clothes, sitting on horseback, emphasizes the color of the horse even more and can barely restrain his free impulse. This willfulness of the animal is reinforced by concentric circles against the background of its hoof, while the rest of the water space is in a state of calm.

On the canvas there are two more horses – orange and white – also with riders, but it is the red that is drawn very clearly and in detail, while the face of the rider is depicted quite schematically.

There is nothing to say about the coastal space: curved in an incredible arc, it looks more like an abstraction.