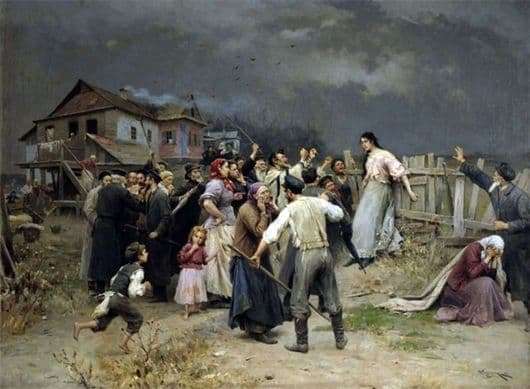 The plot of this picture is based on a real story about the love of a Jewish girl to a guy of a different nationality, for which she was cruelly beaten up by her community.

The painting depicts gloomy twilight. In the sky heavy clouds, crows circling above this place. The whole environment depresses the viewer. It is evident that the artist painstakingly depicted a gloomy landscape to complete the image.

The girl stands, clinging to the fence. It is noticeable that she was running away, that they were pursuing her. But now she is at a dead end and she has nowhere to retreat. The angry mob overtook the unhappy girl. Villagers pounced on a young lover who has something: someone squeezes sticks in his hands, and someone clenched his fists. The blows are rained on the unfortunate: she does not even try to resist, she will not cope with the crowd alone.

Not all villagers seek to live a girl. There are some neighbors who ask the crowd to come to their senses. In the foreground is clearly visible an elderly woman who asks everyone to think again about a young man who swings a stick at her.

On the right sits the girl’s mother. She crouched on the ground and covered her face in pain and shame with her hands. He turned his back to his daughter, she does not want to see what is happening. Next to her is her husband, the father of an unhappy girl. He looks at what is happening with horror, stretched out his hand to the crowd to stop them from this act. But no one pays attention to his father: the crowd is eager for reprisals.

The worst thing is that children also came to look at the massacre. But none of the crowd of furious residents of the community wants to take the children away from here – everyone is either very busy, or they think that such an event is quite normal and normal, and children will only benefit from it.

It is not difficult to guess what happened next. Alas, the girl hardly succeeded in avoiding reprisal. Furious, angry people considered her impudent act to be their own personal insult, for which she was unhappy and paid the price.