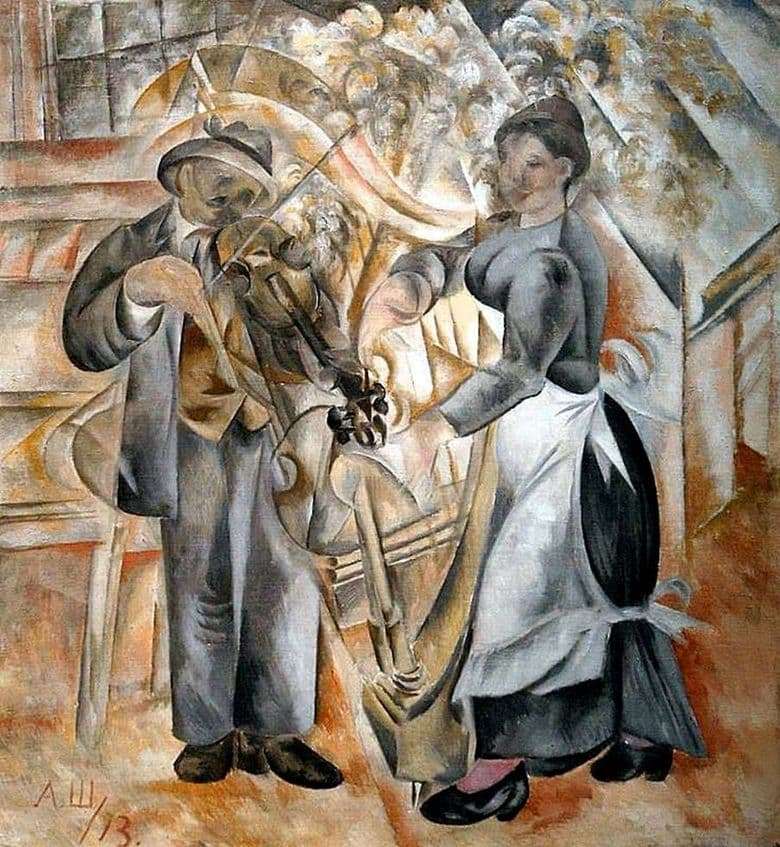 The canvas, painted by Russian avant-gardist Alexander Viktorovich Shevchenko, radiates the magic of music and its beauty. In the center of the image can distinguish the figure of a man and a woman. A man stands, slightly bowing his head, holding the violin with his left hand, and a bow with his right. The artist’s face is extremely blurry, but the shadows in the eyes, mouth and nose hint at the curves of the face. Dressed musician in a gray business suit: pants, shirt, vest and jacket.

Gray color business trousers diluted light strokes of ocher. The hands of the men are also somewhat blurry, as if they flow down like melting wax. From the violin emit yellow curved waves, like the breath of a magical wind.

The elements to the right of these waves are made with careless strokes, implying the expressiveness of the music and its magical effect.

With these strokes, the artist tried to portray the sound, which at first glance seems impossible. However, this energy filled the space, distorted the face of the musician and the woman standing next to him. The listener’s face is also blurry, but behind these strokes there is a trace of a beautiful face, and her lips are stretched in a slight smile.

The hands of the woman, extended to the violin, are also depicted as completely fuzzy and unreal. The background of the image is fuzzy, however it is possible to distinguish a piano and a grayish window in it. The interior elements are made in pastel shades of ocher with light splashes of yellow and blue. The heat of the image, the energy itself flows from this violin. Music completely captured the people, filled the room to the brim. The artist masterfully portrayed the sound itself – intangible and faceless, but tangible.