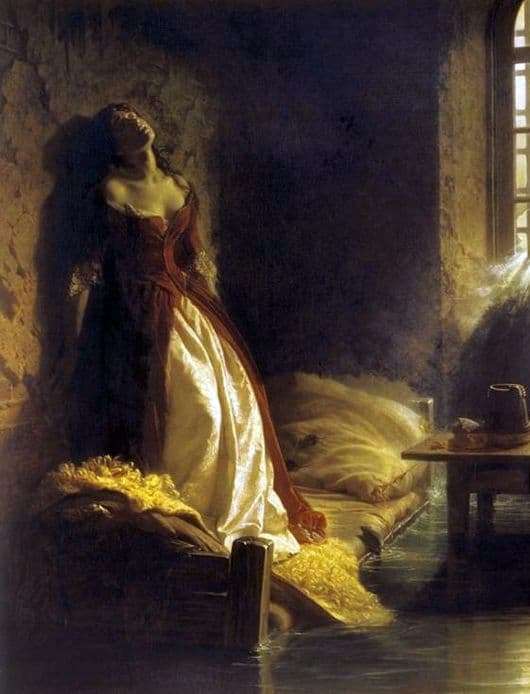 A painting by Konstantin Flavitsky “Princess Tarakanova,” which anyone who has visited the Tretyakov Gallery at least once has seen.

Anyone will be struck by the drama and naturalness of this work, which is based on the real story that occurred during the time of Catherine II. Tarakanov called all illegitimate children of Elizabeth Petrovna, but the picture depicted not just the daughter of the queen, who was never destined to become an heir, but an impostor, posing as such! Being called Elizabeth of Vladimir, she lived in Italy for quite a long time, persuading everyone with her royal dynasty. But after a while, Catherine II found out about the deception, and the impostor was put under arrest in the Peter and Paul Fortress, where she died, and her death was overgrown with legends.

One of the assumptions was that during the spill of the Neva the girl’s camera was completely flooded. This legend attracted

Flavitsky due to its drama, and it was he who chose the plot of his famous paintings.

In the picture we see Tarakanov standing on a bed almost gone under the water, on which rats climb in the hope of escape. She, unlike them, leaned in complete hopelessness against the wall and, closing her eyes and pointing her face to the sky, was waiting for her inevitable fate. What is she thinking about? Most likely – repent, regret unlived life. The basis of the picture is strong contrasts, both in color and in details: a luxurious past, in which the “princess” did not deny herself anything, and only a luxurious dress remained, opposed to the essence of the dull present.

And the body’s breathing beauty and life contrasts with the approaching doom and horror that has frozen on her face. And how pictorially the author of the picture highlights the bright robe of the princess and her blanket, sparkling in the sun, against the background of a gloomy and dull color, which makes the picture even more tragic: all sides.

The painting of Flavitsky at one time caused great discontent of the royal family because of the disclosure of history, which was carefully hidden from the public, and in this form. But despite this, masterfully painted canvas, in which more humanity, expressiveness and truth than anything that even remotely cast a shadow on a known name, was not destroyed, but is still kept in the Tretyakov Gallery.