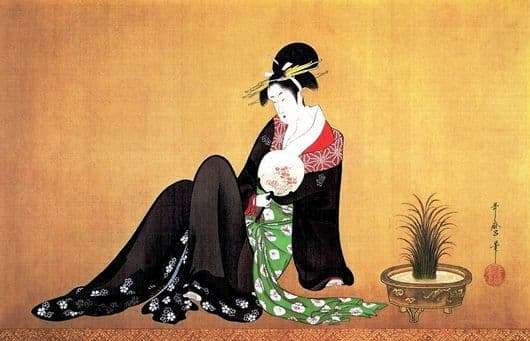 First, the artist began with portraits to the chest, but after that he began to devote time to the details of clothing and some surrounding things. He spent a lot of time in Yoshiwara’s Chinatown. There, a young talented author painted local geishas. They happily posed for the skillful lad, and he improved his technique.

To the background of the image acquired a characteristic brilliance, he added mica to his works.

It was he who raised a special interest in Japanese painting, but only the work ended his sad. Authorities imprisoned the artist for an inappropriate portrait of the hero of the history Toyotomi Hideyoshi. There he received a psychological breakdown and after his release, he lived only two years.

The portrait of this girl received the simple name “Beauty.” This is what the most sophisticated ladies of that time looked like. The face is perfectly whitened with special dyes, the hair is gathered in a traditional bun, and there is a paper fan in its hands. The girl sat neatly on the ground, leaning on the arm.

The author focuses on her colorful outfit. At first it seems that the kimono is dark and unattractive. But then I want to consider green fabric and white embroidery on the hem. On the right side is a characteristic Japanese plant in a wide bowl. The female image was very expressive. The girl thought about her life and is in no hurry to fix the kimono that fell from the air.

Details the artist does not pay attention, we do not know where the girl is, at home or on the street. Around her is a golden yellow background. It is due to this that the lady herself and her pretty outfit can be clearly seen. She sits in a very uncomfortable position, but this does not prevent her from being the most beautiful and charming.