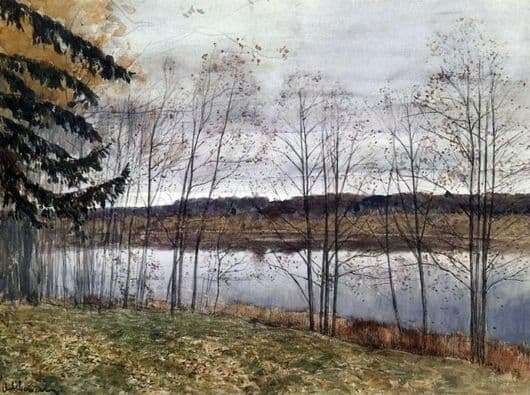 Autumn is one of the most mysterious and colorful seasons, which at all times was glorified by poets and inspired artists to their most beautiful paintings. Levitan was no exception.

He painted the picture “Autumn. October “is one of the most famous Russian artist Impressionist Levitan in 1887. His landscapes devoted to autumn are distinguished from others by their vitality and sensuality. They were originally created for people, not for museums or private collections. Levitan was able to maximally convey the positive side of the autumn pore: a cool autumn came to replace the summer heat, which would give the earth the desired rains and colorful decoration of trees.

Despite this, in the colors that the artist used, there is a profound sadness, and even depression. All this is not by chance. The fact is that it was in 1897 that the artist became seriously ill. It was creativity that was his medicine; therefore, all the works of Levitan of that period, despite sensuality, were imbued with somewhat sad colors and details. In addition, if you look closely at the picture “Autumn. October, you can notice a certain internal opposition, the real struggle of the creator with the disease: in the gray, “dead” branches, a young green twig grows, which shows hope and faith in a bright future. The same meaning and embedded in a bright strip above the horizon.

But the greatest inconsistency is expressed in the image of the river and sky. First, they are made in semitones, where the grayness turns into milky-white shades. Secondly, the reflection of the firmament in river water can also be divided into two parts: light and dark. No wonder it is this creation of the artist called the antipode. Despite this, it is in it that the artist’s true love for his homeland can be considered.