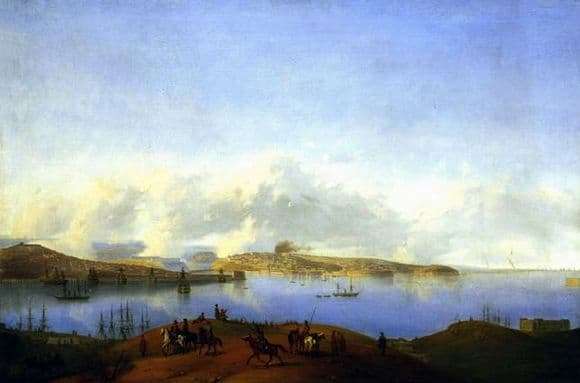 In the autumn of 1854, one of the most epic events of the Eastern War unfolded in the area of the seaside city of Sevastopol. The combined forces of the French, the British and the Turks disembark north of Sevastopol Bay and try to take the city by storm.

The heroic defenders of Sevastopol have successfully defended the city for many months, using all available means to do this. Sevastopol Bay is filled with sunk ships. This makes it difficult to approach the city from the sea, but in general it represents a sad spectacle, which the famous artist observes upon his arrival at the place of hostilities. Impressed by what he saw, Aivazovsky proceeds to work on the canvas, now known as the “Siege of Sevastopol.”

The picture is a huge panorama of the city, starting at the northern tip of the island and ending with the Chersonesus lighthouse and masts of flooded ships. On the besieged city comes the evening. Most of the paintings are set aside for the evening sky, covered with smoke from gunfire. The half-destroyed buildings seen far away illuminate the evening sun, which gives the whole picture a certain fragility and transience.

In the foreground of the picture, the viewer is represented by hilly terrain, beyond which the sea and the opposite shore can be seen. At the bottom of the picture are several riders moving. These are the Cossacks guarding the captured French. Near the opposite shore one can see the Allied ships firing on the city batteries. The battle does not subside for a minute, which does not allow you to fully enjoy the idyll of the autumn evening and gives the picture anxiety inherent in wartime canvases. Soon the night will come and create a fragile illusion of tranquility, but tomorrow a new day will begin, the result of which is known to God alone.

The canvas was presented to the public after the war, in 1859.