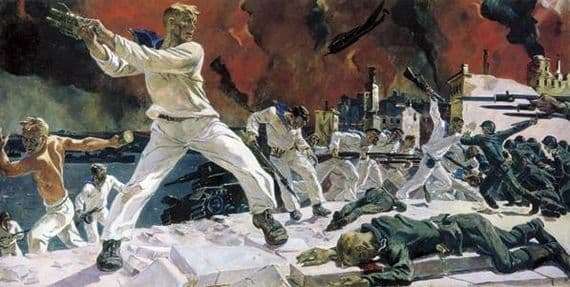 The historical canvas “Defense of Sevastopol” A. A. Deineka created in the war years (Moscow, 1942). Today, this masterpiece of art is kept in the St. Petersburg Russian Museum.

The artist’s photos of the ruins of Sevastopol became the subsoil for painting. Deineka has been collecting materials about the hero city for a long time, making many sketches and sketches, carrying his idea of showing tragic events to the viewer.

In fact, Deineka was the author of a monumental epic work of art, which summarizes the heroic image of the Great Patriotic War. On the canvas, he captured the heroism of the Marine Corps, a soldier who had given their lives while defending Sevastopol.

On the embankment sharpens hard battle. The sailors of the Soviet army cut the path of the enemy troops. The background shows buildings collapsing, everything is ablaze with fire. To the fore, the author displays a wounded sailor. In his hands – a bunch of grenades. Standing in full growth, the sailor is trying to throw her. The muscles of the face tightened, the soldier spread his legs wide and pulled his arms to the sides. Such a firm position testifies to the selflessness of a warrior. He is ready for battle, even his intense breathing is felt.

To achieve the veracity of the image, the artist shifted the figure of the sailor slightly to the left. Thus it seems that the grenades are about to fly past the remaining space. A masterful painter also approached the image of the oncoming German troops. Here he used a kind of compositional technique, showing only protruding rifles. The superdynamics of the picture give people in motion in the background.

As for the color of the picture, it is built on the contrast – the red sky and the white form of the sailors.

There is no time limit in the picture. Considering it, the viewer unwittingly becomes a participant in what is happening.