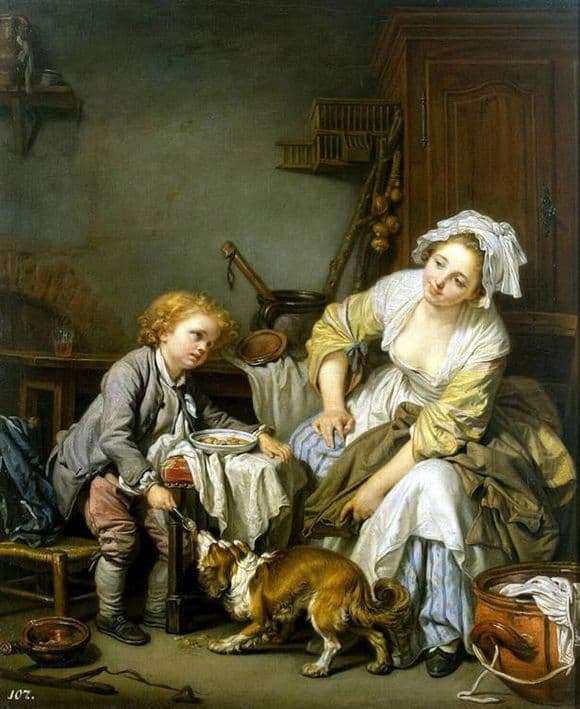 The legendary picture of Zh. B. Dreams “Bald Child” is the most valuable exhibit of the State Hermitage Museum, located in the city of St. Petersburg. In total, the museum houses 11 works by the artist. The picture is made in the once popular Rococo style, oil on canvas.

The masterpiece was born in 1765. The artist liked to supplement his works with a corresponding literary explanation, therefore, in part, the picture is also an illustration of his thoughts. Like all the works of Jean-Baptiste Greza, “The Tainted Child” is intended to enlighten the viewer. The canvas contains a deep moral undertones that can be a lesson for everyone.

The plot in the picture is simple and clear. Heroes of the picture are extremely typical, their poses are deliberately unnatural and played up. The central figure is a boy, clearly unwilling to accept the food offered. In order to quickly get rid of the hated food, he quietly feeds her dog using cutlery. At the same time, food from a spoon falls to the floor. Nearby is a young charmer. Her face is humble and calm. The situation is not new to her. The girl is exhausted by the behavior of the child, and is not even able to scold him. Another name for the work is “The Fruits of Bad Education”

It should be noted that the picture is imbued with the usual for a dream notes of erotica and theatrical behavior. The dress of the girl has a very deep neckline, her eyes were touched by sadness. Often the artist introduced allegorical images of lost innocence, regret about it. Similar subjects were quite popular in the 18th century.