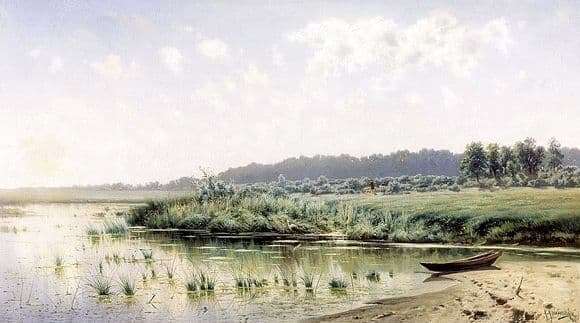 Konstantin Yakovlevich Kryzhitsky is a Russian landscape painter. Despite the fact that the artist traveled extensively in Europe, he drew the main inspiration from domestic expanses. In his works, the creator used not only oil, but also watercolor, pencils. He was the organizer of many exhibitions in which the viewer could get acquainted with the work of Kryzhitsky.

The painting “Before Noon” was written in 1885 and is one of the most popular works of the artist. He developed his own style of writing, using the game of colors and shadows. Contemporaries admired the talent of Kryzhitsky, claiming that they literally “dissolve” in the atmosphere of nature, which the creator presented in his canvases. The artist managed to present the world around him in his naturalness, without focusing on something one. In other words, all the works of the master are distinguished by their integrity and harmony.

This picture shows a small reservoir covered with vegetation, on the shore of which a small boat is located, and a man is walking far away. The main idea of ​​this work was the play of light. The sky and clouds are depicted in such a way that, overall, the picture really resembles the time before noon, when the sun has not yet risen high, and light morning calm and calm prevail around. The artist also drew the viewer’s attention to the bird at the shore of the reservoir, thus emphasizing the peaceful coexistence of man and nature.

The work is dominated by mostly gentle tones of blue and green shades. The realistic sky drawn is reflected in the water, which the viewer literally feels when he looks at the canvas. The beauty of untouched nature in the early morning is the main idea that the master wanted to share when writing the painting “Before Noon”.