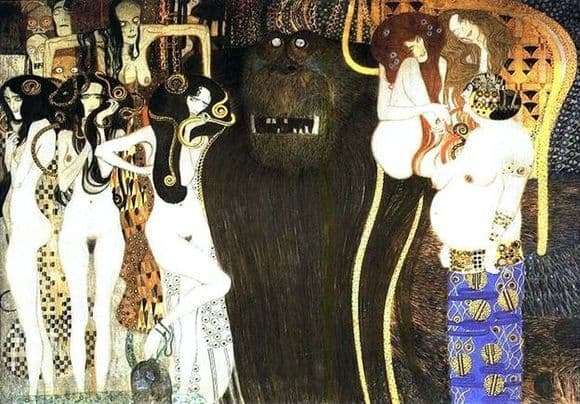 In 1902, an exhibition-memorial was held in the Viennese Secession, which was dedicated to the memory of the great Ludwig van Beethoven. Gustav Klimt saw genius in the musician, and in his creative activity – the embodiment of love.

Especially for the exhibition in 1902, the artist created the Beethoven Frieze. The public reacted negatively to the picture: it was called lifeless and harsh, and the figures were considered ugly. In particular, this concerned the three Gorgons depicted. They lack chastity, purity and abstinence, the public said. These reviews – the cause depicted on the canvas of the genitals, eggs and sperm.

On the composition from the left wall there is a knight who goes to fight with evil forces. Behind him are women who symbolize Victory and Compassion. The composition on the right consists of figures – symbols of Joy and God’s Spark. On the central image there are evil forces. Among them are Typhon, the Gorgon, which are a symbol of illness, madness and death. Female figures on the right side symbolize sensuality, passion and incontinence, and the woman aside – a symbol of anguish.

When creating a picture, Klimt did not count on her further exposure after the exhibition. Therefore, the frieze was not available to the public in subsequent years. But from the end of the last century, she returned to her place in the Vienna Secession.