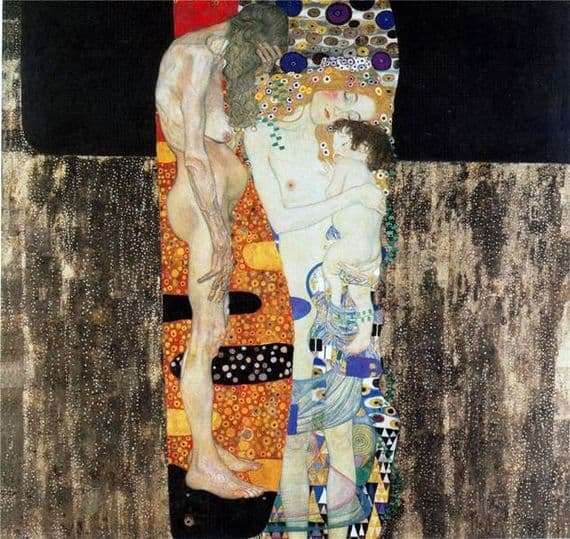 Gustav Klimt more than once addressed women’s issues. He was worried about the inner world of a woman, as evidenced by the predecessor of the painting “Three Ages of a Woman” – the painting “Love”. In his unusual picture, the artist tried to touch on the widest possible subject – the psychological state of a woman in different age categories.

Klimt conditionally divided the life of a woman into three periods: adolescence, maturity and old age. The artist managed to unite, it seemed impossible – life and death, spending between them a thin connecting thread. Therefore, the picture of the audience caused a variety of feelings – joy, regret, sadness and fun.

The children’s figure symbolizes a carefree period in the life of a girl, when she is bathed in affection and has not yet tasted the grief of women’s fate. The stylized image of an adult woman draws attention to her mature beauty and maternal instincts – she presses the child (that is, herself) onto her breast with care. Nearby is an elderly, hunched-up woman who has performed the veins in her arms and testifies to the fact that she has worked many days in her life on hard work.

In contrast to the two images, a certain symbolism is observed – a young woman enjoying her life is depicted with her head up. The old woman, on the contrary – with her head down, symbolizing the humility and understanding of their fate.