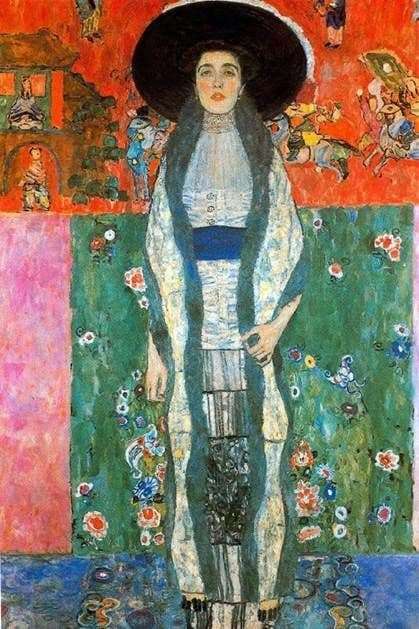 Can Adele Bloch-Bauer be considered a kind of “muse” by Gustav Klimt? In a certain sense, perhaps, yes. Since this young woman served as a model for as many as four works by an Austrian artist: “Judith I”, “Judith II” and, in fact, two portraits of the heroine numbered I and II, written in 1907 and 1912. Adele was the daughter of the head of a Viennese banking consortium, was a rich girl, spoiled, accustomed to a secure lifestyle, and at the same time, sweet and charming.

According to the testimony of Adele’s native niece, she often suffered from headaches, continuously smoked like a steam locomotive, but at the same time, she was known as a tender and languid woman. Adele was the wife of a wealthy Jewish merchant, owner of sugar mills, Ferdinand Bauer, and before that she was married to his brother Gustav.

With Klimt, the married couple Bloch-Bauer had close friendships, and they were part of the so-called “bohemian party” of Vienna. Unfortunately, Adele’s life was cut off pretty early – she died from brain inflammation, however, having managed to become the main character in several creations of Gustav Klimt.

In the painting “Portrait of Adele Bloch-Bauer II,” we see an attractive young woman with an expressive face standing on the garden path. Is this the famous garden of the Austrian painter, where, as rumor went, naked ladies walked around, among whom were representatives of the highest aristocratic circle? Quite possible. However, Adele is wearing a wide-brimmed hat on her head, her face is turned towards the viewer, and one hand is hidden in the folds of her dress. Dark eyes look confident, but a little sad. Of course, Adele Bloch-Bauer could not have known at that time that after a hundred years, her canvases would cost millions of dollars. But she would not care.