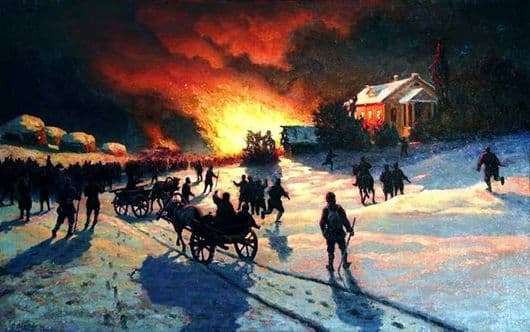 In general, in the second half of the nineteenth century, the Russian landscape experienced its dawn, largely due to the interest of artists in the life and habitat of the ordinary Russian, especially the peasant. Volkov also succumbed to this influence and wrote many magnificent Russian landscapes. Among the representatives of this trend in the Russian landscape, Efim Volkov takes a prominent place.

The time of year in the picture is similar to the early winter or its end, we can guess about it due to the low snow drifts and shallow rut along which the carts race. They are heading towards a golden-red fire, rolling in scarlet clouds. He has already managed to grow to enormous size and spread to many houses, which makes all the villagers rush their forces to fight him.

The red light falls on the houses, the snow and the people whom we see almost black silhouettes with pinkish outlines. In general, corresponding to the name, the main place in the landscape is occupied by a bright fire. In contrast, the snow is grayish-blue, and the sky is absolutely black. But in the whole picture, the interest is the people and the reaction of each of them to a fire.

But why chose exactly this state of nature? He was worried not only by the beauty of the Russian land and the cheerful elements of the peasant’s life, but also by the problems that the Russian people faced. The resulting landscape makes the viewer dive into his atmosphere, in which all villagers experience not panic, but grief and a desire to help others. This canvas, like many others, confirms the talent of the master painter Volkov, who could depict without frills and embellishment what would excite the viewer, forcing him to empathize with the characters in the picture.