Home ⇒ 📌Masaccio ⇒ Description of the painting by Masaccio “Exile from Paradise” 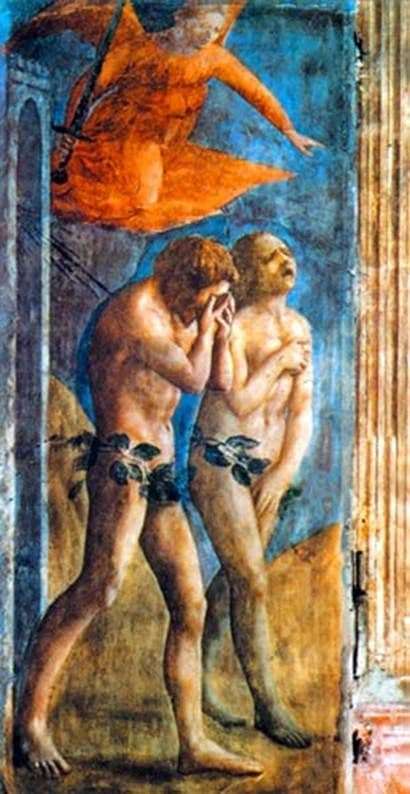 Masaccio painted a picture 1 year before his death (the Italian lived in total for 27 years). Contemporaries called him a genius of his era and believed that he studied with the famous painter Mazolino, who lived and worked in Florence for the time of his maturity.

The painting “Exile from Paradise” amazes with skillfully transmitted space and plane. Masaccio learned to depict elements of the landscape and buildings from a famous Florentine architect from Brunelleschi, who took on the care of a young and promising artist for several years.

Masaccio used the accumulated knowledge of Brunelleschi to transfer the volumetric elements of the figure (it is worth noting that this is the first artist who successfully placed the human body with the support of the entire foot on the ground in the right angle). After a brilliant artist for a long time, no one could depict the people in the picture as accurately as Machachcho

For the basis of the plot, the young artist took the legends about the apostle Peter. Later, he liked this image so much that he plunged into biblical legends and stumbled upon a legend about exile from Paradise. Masaccio worked a lot, and as a result, he managed to write an incredible beauty picture of Adam and Eve. On their faces, there is a strong regret for their misconduct, and with an obvious acting game they are trying with all their might to show that they are deeply grieved by their exile.

The picture caused unprecedented delight in society. She even liked the head of the Catholic Church, which suggests that Masaccio endured the style of the depiction of sinners Adam and Eve. A talented artist masterfully conveyed all the curves of the naked body, precisely emphasizing the mechanics of the surrounding world. The closed face of Adam with both hands testifies to strong spiritual torment, in such a pose he is, as it were, contrasted with Eve, who is not shy of her feelings and sobs.