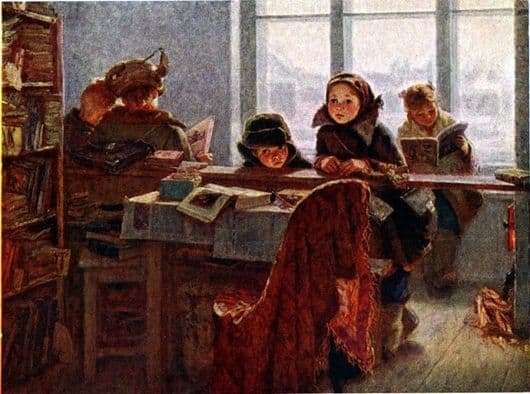 The end of the 50s of the last century, winter in the Soviet countryside and the most cherished place for children is the village library. It is warm, cozy, interesting, and this is their favorite place.

The painting “In the Rural Library” by a young artist I. Shevondronova was written as a thesis, but this did not prevent her from becoming one of the best in her genre in Soviet painting of the 50s of the 20th century. The artist in the tradition of social realism described the common area of ​​rural libraries. Visitors to this library are curious children, different in age, but the same in their love of reading. Some already delve into the world of knowledge and read, while others are waiting.

A neat girl, probably an excellent student, sits on the windowsill and carefully reads her book. She has a “correct” and popular for those times hairstyle – two pigtails laid back. In general, I would like to say that the artist, and not only in this picture, very thoroughly and truly reflects all, even minor details. So the boys, with signs of fervent village boys, are looking at a book (most likely an interesting picture) and probably discussing something.

But the main faces of the picture – the girl, and most likely her little brother, in anticipation of receiving the book. They are as successful as the images that immediately appear nostalgia for the good, bright and frank. Big-eyed, with ruddy cheeks, with curious facial expressions and in anticipation of a new and desired book. From under the caps a little embarrassed, but at the same time confident look in anticipation of a miracle is looked at the little reader.

The fact that the rural library is shown in winter makes it more contrasting both the library and its visitors. The successful combination of colors – white, shades of gray and red, highlight the special warmth of the picture and make its figures soft and natural. In the overall design of the picture fits well and the window overlooking the real winter. Despite the cold outside the window is light. And this is the light of knowledge, as well as faith in the light in life, to which the children who visited the library were striving.