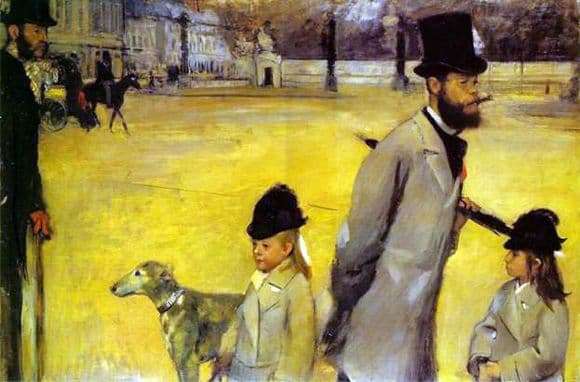 The masterpiece by Edgar Degas entitled “The Square of the Concord” is one of the fundamental works in 19th century painting. The appearance of the picture played a large role in shaping the views on art in France and around the world. At the heart of the picture are images of real people close to the house of the artist. The man in the background is the writer L. Alevi. Closer to the viewer is the Viscount, who himself was known as a not bad artist, L. Lepik and his two young daughters.

The product was the result of a sharp deterioration in the financial situation of Edgar Degas. The master had to portray the viscount’s family, and then sell the canvas to him. This helped the artist to help out a small amount of money necessary for life. The property of L. Lepik was a long time. About her fate, nothing was known almost until the beginning of the 20th century. Sketches are not preserved or fell into the hands of private collectors.

Some time later, the “Consent Square” was discovered in the collection of the eminent owner of the art gallery P. Durand-Ruel. However, the lower part of the work was cut off. It was she who most likely contained the artist’s autograph. The lack of identification greatly complicated the definition of the author. After long vain attempts to sell the masterpiece, finally, it was acquired by the German O. Gerstenberg.

The plot of the work is very prosaic. Despite the seemingly calm plot, the pallor of colors and the smoothness of the lines, the thought is somewhat deeper. Children and adults in the picture are turned in different directions. Thus, the author reveals the eternal problem of fathers and children. The reflected difference in the views and worldviews of generations, as if in mockery, is called the “Consent Square”.