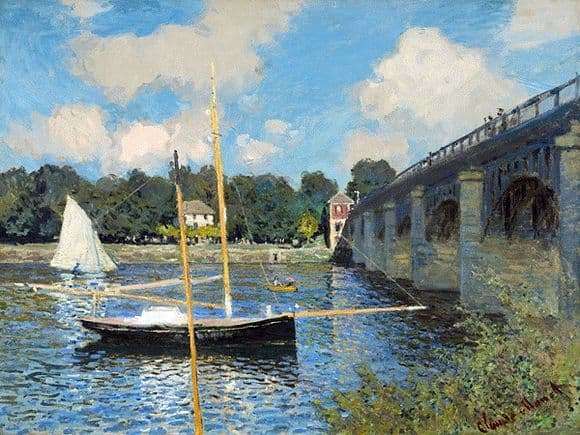 The landscape of Claude Monet’s “Bridge in Argenteuil” depicts the morning in the Paris suburb, where the artist lived for some time, wanting to step back from the bustle of the city and enjoy the work in the open air. Fine art in France at the end of the 19th century underwent almost revolutionary turns, when a group of masterful artists with all their works and actions resisted the established academic practice to allow only acceptable artists to enter the salons. In 1873, they managed to open their own exhibition, and in 1874, thanks to the painting by Claude Monet “Impression. Sunrise”, the new direction of painting also received its own name – impressionism – from the French “impression”, which means “impression”.

And in all his works in the future, the young artist uses non-academic methods to convey the mood of nature, sunlight and unusual colors as vividly as possible. So from the picture “The Bridge in Arzhantey” as if a fresh breeze breathes, it smells hot from the sun foliage, the chirping of birds and the spontaneous conversation of two passers-by on the bridge are heard. The bright glare on the water and the reflection of the fishing boat in the foreground are made with a special technique of separate contrasting strokes on a common color background and in the same blue gamut as the sky with clouds in the background of the picture.

This optical effect not only creates an impression of the landscape being filled with air and light, but emphasizes its transience, the thrill of a single moment, the moment in which the branches of the bush on the shore and the clouds froze for the artist, and in a second they will continue to float and tremble in the wind. Even the lack of detailing, as if the incompleteness of the picture – all these methods allowed the artist to convey the beauty of nature and the variability of the summer morning.