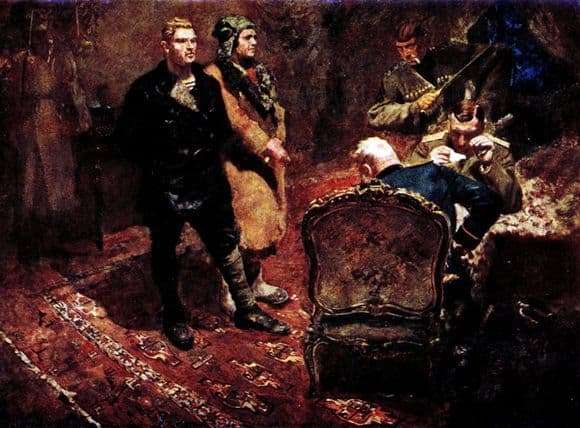 Thoughts about this picture tormented the artist for several years – I wanted to find the perfect composition, the ideal heroes to achieve the goal. The goal was not easy to achieve – Johanson wanted to show the difference between the communists and the whites, the irreconcilable contrast of the social strata who want different things, who saw different lives and feed absolutely different, and sometimes opposite, hopes.

The first impetus was seen in the theater, where the artist at one time worked as a sham, a performance. In his memory, nothing was left of him except the girl in a sheepskin coat, which was interrogated by some completely unknowable enemies.

The second push was later, in the museum, where a picture was shown in which whites interrogated a communist. After that, a girl in a fur coat clicked in Ioganson’s head, and the compositional plan was ready. At the beginning, however, the sketches were oversaturated with details. The communists seemed to be too painful for them – beaten, tied up, too oiled whites, too abundant with trivia was the situation.

The second game was better – the situation faded, the Communists became stricter, getting rid of the obsessive aura of martyrdom, but the whites remained blurred and indistinct.

Only on the third attempt, Johanson finally found what he was satisfied with.

In the hut of a wealthy peasant – the fist – among carpets, luxury goods, whites interrogate the captured communists. Those are standing in the middle of the room, as if moving out of a slightly blurred background.

A man stands, slightly lifting his chin, expressing all kind of contempt and willingness to die. The hands behind him are most likely tied, but by his posture this is not understood. The girl next to him is similar. She has a peasant face, a heavy figure, but it doesn’t matter – she looks at the interrogators with the same disdain.

Whites are depicted more repulsive. The officer in the expensive chair is sprawled, with a folded neck, the adjutant doesn’t give a damn about everything, he looks at the papers, and the Cossack, a healer with a stack, seems to be barely holding back so as not to hit the prisoners in the faces. The contrast is obtained intuitively clear, obvious and sharp.