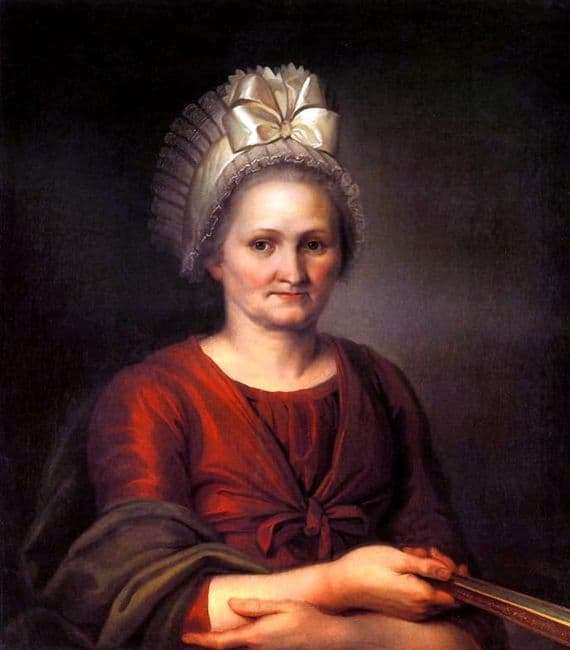 Venetsianov – Russian artist from a poor family, originating from Greece. His very name came from the nickname “Veneziano”, which was worn by his great-grandfather, who arrived in Russia. He was born in Moscow, worked at the forest department, was distinguished by great observation and attention to trifles.

He preferred to write genre scenes from the life of the peasants, took pupils – one of them, Soroka, was a serf and enjoyed a great deal of love from Venetsianov. Unfortunately, he was not famous and did not even get freedom – during the peasant revolts he was thrown into prison, where he committed suicide.

“Portrait of a Mother” – the first famous painting by Venetsianov, which brought him a celebrity. Written in a lyrical realistic style, conditioned simultaneously by the principles of Venetsianov – “It is necessary to write truly, as it is in reality” and its relation to the mother, which adds sentimentality. The old woman in the picture looks good.

On gray hair, a curly wig adorned with a beige lush bow. The scarlet blouse is tied on the chest, a light shawl is draped over it. Her hands are folded under the chest, in her right hand she holds a folded fan. Her face expresses concentration, she looks a little to the side, as if a little embarrassed.

It is easy to imagine how the son-artist asked her to pose, and she, considering this a very important matter, pretended and tried to remain motionless. There are practically no wrinkles on her face – only the nasolabial folds are marked by age, there is a light blush on her cheeks. The situation itself is unusual for her, constraining her and at the same time flattering.

In the way she is depicted, one feels the skill and at the same time love, which gives the picture a special charm. A portrait of a stranger will never be so alive and tender. “Portrait of a mother” – as if gratitude to all mothers.