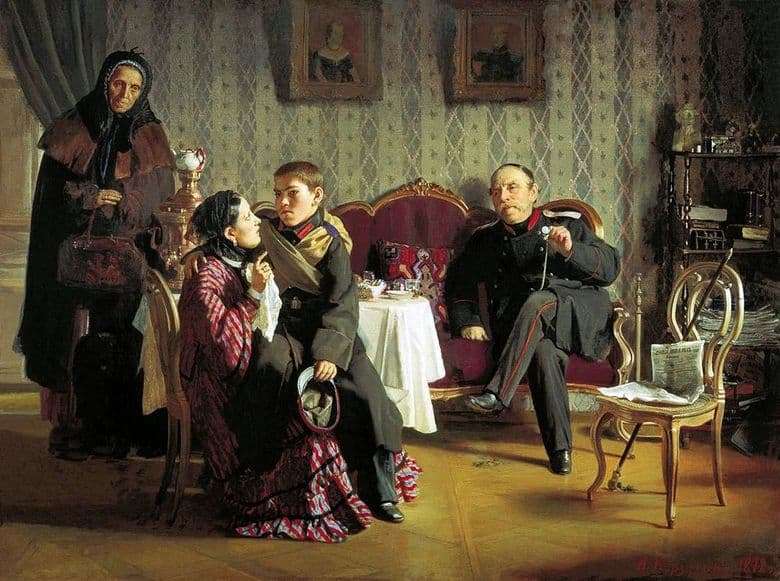 Creativity A. I. Korzukhina devoted to genre household painting, he usually chose motifs for paintings in everyday life, which he contemplated and described, expressing sympathy for his characters. The canvas is made in serene tranquil tones, corresponding to the chosen plot. On canvas, the artist shows the landlord family at home. They accompany their son, a teenager, who came from the cadet corps for the holidays.

On the left, in the foreground, a mother sits on a chair with a rather grown-up son sitting on her lap, dressed in military uniform and ready to leave. A woman is worried before the next separation. However, she knows that it is necessary, but she wants to extend the moments of separation, and she uses them for the final briefing. The artist wonderfully depicted this action with the help of anxious expression of the face and gesture of the hand with an extended index finger. The boy, on the contrary, does not look at his mother, looking away to the side, he is already mentally outside the house. The author shows the characters of his characters through the nuances of color, accuracy of details.

The artist is accurate in the depiction of elements of clothing and furnishings. The woman is dressed in a homemade dress with ruffles in a red-gray strip, the head is covered with a black openwork scarf, in her hand she holds a snow-white handkerchief, with which she wiped occasionally nodding tears. The boy is dressed in a long dark coat with red uniform stitches in his buttonholes, a yellow scarf, missed under epaulets, crossed on his chest. In his hands he holds his headgear. Behind the chair, there is also an old woman, already dressed in the road and with a travel bag, ready to accompany the young man to the place of study.

Opposite this group of characters sitting on the couch, lounging, stretching his legs, the father, holding a watch on a chain in his hand, reminding of time. He is also dressed in an unbuttoned uniform coat with red buttonholes, shoulder straps and stripes on his trousers. The second hand, he leans on the sofa, and his face expresses anxiety and concern.

The artist carefully wrote out all the details of the furnishings: a table with a snow-white tablecloth, covered with tea, portraits on the wall, a chair with an unread newspaper and a father’s cane. The painting conveys a family scene in a house where people recognize a sense of duty, sending to serve their only son.