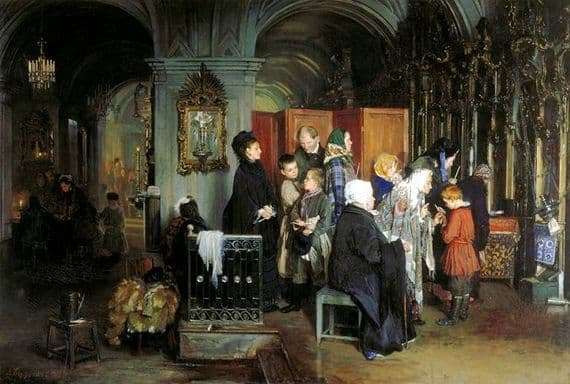 Korzukhin – Russian artist, who worked in the style of genre painting. His paintings are distinguished by attention to detail, ease of hand, subtle knowledge of the aspects of life of different classes of the time – the peasantry, the merchants, the nobility. Everywhere he describes any characteristic scenes, without addressing mythical or religious themes.

It was the predilection for vitality that made him a participant in the “riot of fourteen,” when fourteen young artists left the Academy of Arts at once, protesting against injustice.

That year the Academy was one hundred years old and it held a competition for the best picture. For all genre painters they defined the same theme – “Feast in Valhalla”. After several petitions and requests to allow them to choose the topic themselves, the most freedom-loving students, among whom was Korzukhin, left the Academy forever.

confession” – one of his famous paintings. She depicts a small temple. Icons on the walls in gilding. Candles are burning in lamps and candlesticks. For the exposed screen, which has fenced off a small nook, the priest prepares.

In front of the screen are parishioners wishing to get to the confession. A few neat old women in headscarves, an old man, a young lady in rich clothes, waiting with aristocratic self-esteem. And the children – they worry a little, huddle at adults, listen to the last instructions – perhaps for some of them this is the first confession, and they painfully go through their actions, looking for sins. Gave your ear to neighbor Fedka – a sin? Stole an apple from the garden – a sin?

Waiting rings in the air, the rest of the temple is hidden in the twilight – there are also people moving there, but they cannot be seen so well and understand what they are doing. The abundance of detail, facial expression makes the picture alive. Each character on it can come up with a story – or rather a dozen stories.