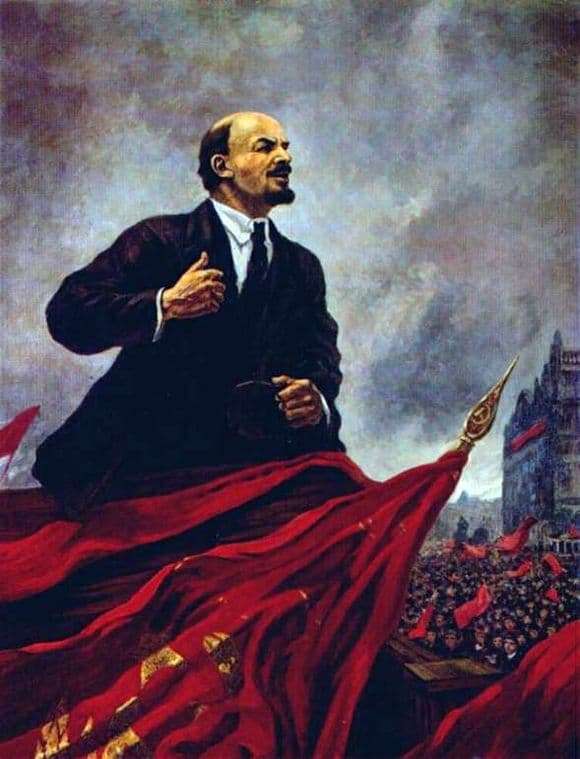 The glory of the Soviet art figure was earned by A. M. Gerasimov for his famous work “Lenin on the Tribune”. The image of the leader of the revolution was duplicated from the picture millions of times. The artist managed to best convey the greatness of V. I. Lenin as a key figure in the communist movement.

“Lenin on the podium” was written in several stages. The portrait was completed by 1930, and the plan was born ten years earlier. The author rewrote his picture several times. At first, he did not like the position of the leader’s body in the picture when he was holding the jacket with his left hand. Then Gerasimov re-painted the portrait, focusing on the right hand.

Before directly creating the legendary canvas, the painter studied documentary materials about Lenin for a long time, took photographic images into account, and talked with people close to the leader. Gerasimov himself was only lucky to personally see the leader of communism twice. But from a long distance it was not possible to make out his features to the necessary degree. The artist wanted to accurately depict a portrait of Lenin and convey the strength of his spirit, the power of his influence on the masses.

At the stage of writing Lenin’s face, Gerasimov was assisted by K. Ye. Voroshilov, who personally knew the main communist. Valuable guidance handy portraitist. When the face was written as close as possible to the original, Voroshilov advised the artist to no longer make any amendments. Gerasimov listened to the advice of his friend.

The figure of Lenin is placed high in the stands. He broadcasts to the people about the coming changes and invites everyone to become their driving force. In the foreground, large scarlet banners with the symbols of communism are developing in the wind. These flags flash in a huge crowd of people at the podium.

The background for the portrait is a dark sky covered with thunderclouds. This emphasizes the revolutionary atmosphere in the picture.