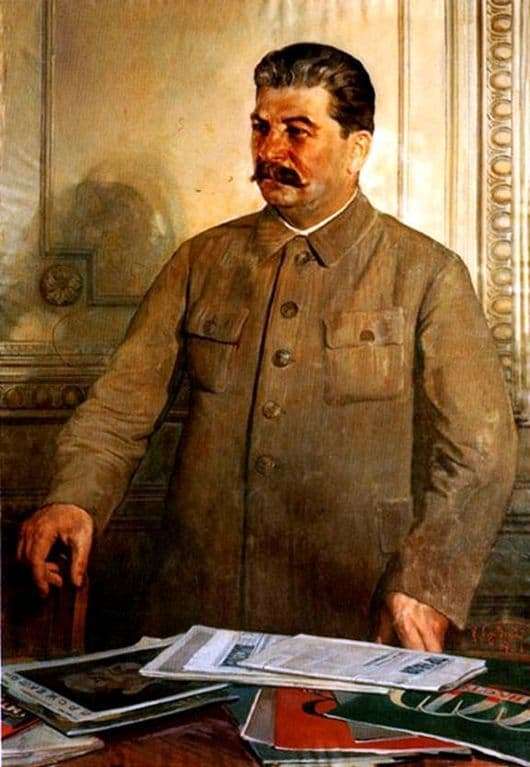 Portrait of the famous Joseph Vissarionovich Stalin, painted in oil on canvas. The artist Brodsky very often painted portraits of famous and talented people from various fields of activity. Many works are devoted to the leader of the proletariat, Lenin. However, this picture depicts the most severe and tough person, but a wise and strict leader in the history of the USSR.

Stalin is depicted on the background of his workplace, where he spent most of his time. In front of him on the table with amazing clarity and credibility, the artist depicted stacks of newspapers and magazines of a political and economic nature. In the background is a beautiful, lined with plates of gold, a wall, on the brilliant surface of which falls the shadow of Stalin standing in front of her.

The leader himself stands, leaning slightly on a cane. His whole posture speaks of power, authority. The back is straight, the posture is proud and strict, the look is fixed to the side. Stalin stands, turning slightly to one side. The perfect hairstyle – combed back hair, as well as smoothly combed and neatly trimmed mustache – all this gives a person a clear organization who loves order and structure in everything. The perfect white shirt collar peeps out from under his uniforms of military style. The clothes themselves mustard-brown, strict cut.

In general, the whole portrait is designed in restrained, warm colors from yellow to dark brown. What reflects the essence of the character of the leader. The golden halo of the wall behind it underlines his greatness and significance of the figure. The bright spots in the picture are the magazines lying on the table in front of Stalin.

The whole portrait is saturated with life, character and features of the person depicted. Every detail reveals the essence of his deep and controversial nature.