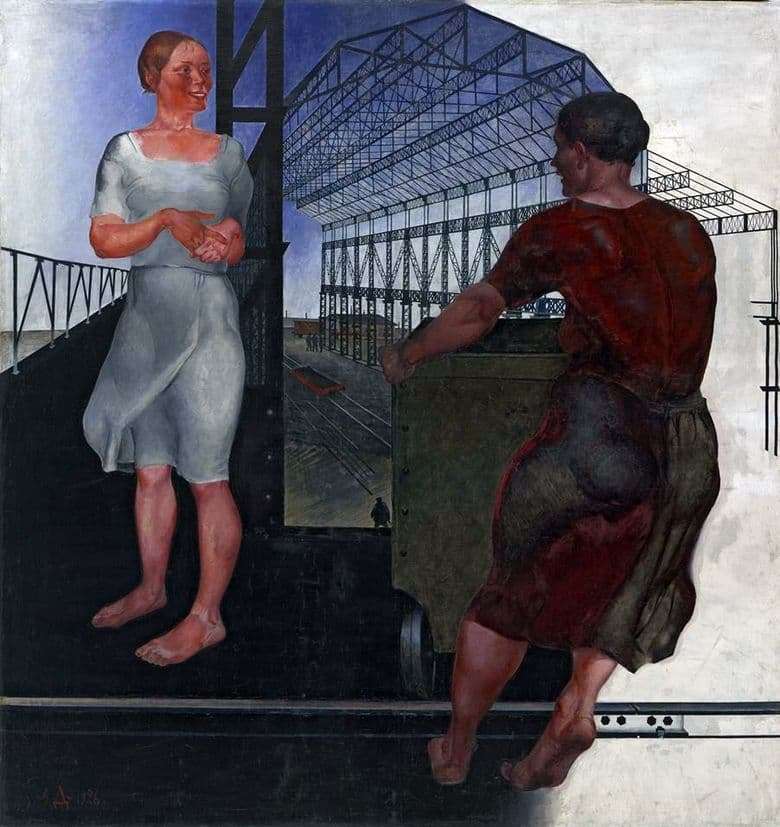 The painting “At the construction site of new workshops” was created in the era of economic growth and industrialization of the country of the Soviets. Alexander Deineka was fascinated by the idea of the rapid development of the state, therefore with all the heat and energy he sought to convey his hopes for a bright future in this picture.

The canvas depicts two women talking against the background of an industrial building under construction. Compositionally, the picture can be divided into two parts. The left half depicts a young girl, behind whom we see already built beams and floor slabs. The girl’s figure is almost weightless. The light dress, dreamy smile and dark background of the surface on which the young heroine is standing creates a feeling of soaring.

In the right side of the picture, the background has no color. It is filled only by the figure of a working woman moving a heavy cart. The back of this part of the plot is drawn with such care that it resembles the work of Michelangelo by naturalism. The Soviet artist managed to convey the power of the human body. We see every tense muscle of a woman and almost physically feel the weight of her trolley. The pictured woman looks very believable. It seems that a little more – and she will go beyond the boundaries of the picture and collide with the viewer.

The images of both heroines in combination with an unusual background convey the metaphor of the picture. The exhibition predicts the rapid development of the industry. Where now there is nothing, after some time, the shop will appear. The Soviet woman and other people of her generation work day by day tirelessly to paint the as yet unfilled future and to convey to the youth in the face of the girl the achievements of their hard work.