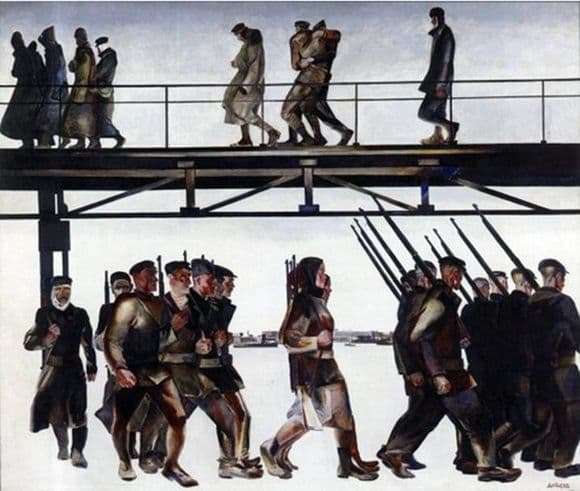 Deineka was a Soviet painter, who preferred genre scenes to all other genres, and styles – socialist realism, which is characterized by great accuracy, a certain angularity, the absence of unnecessary details and an obvious chanting of the socialist system. He was a party, in his time participated in the defense of Kursk against whites. Its mosaics adorn some stations of the Moscow metro – for example, Mayakovskaya and Novokuznetskaya.

The Defense of Petrograd is one of his epic canvases. Preparation for its writing was long, but it took only two weeks to work directly with the canvas and paints – the concept was ready, many sketches were created, and it was enough just to transfer the plans onto paper.

The picture is divided into two tiers, as it were, and soldiers are marching along both. Below – healthy and strong, just going to war. Their commander Deineka wrote from the present military commander, whose type he liked very much.

Their figures are sketchy in their own way, in order to discern living colors, facial expressions, details of costumes in them, they need to take a closer look – they go through the snow, and the artist wrote that people in the snow always appear to him only silhouettes of people, which is reflected in the picture. Nurses go among the soldiers, they are all armed, their faces are harsh and they are ready to fight to the end.

The wounded, returning from the war, are striding along the upper tier. Even more sketchy, crumpled, skewed, they no longer create a sense of strength and inflexibility, leaving only pity and some deep misunderstanding of the meaning of war.

As the healthy ones go beyond the edge of the picture, as well as the wounded, a kind of cyclical, depressive circulation of the composition is created, which shows how much any war makes no sense and how infinite it is, in essence.