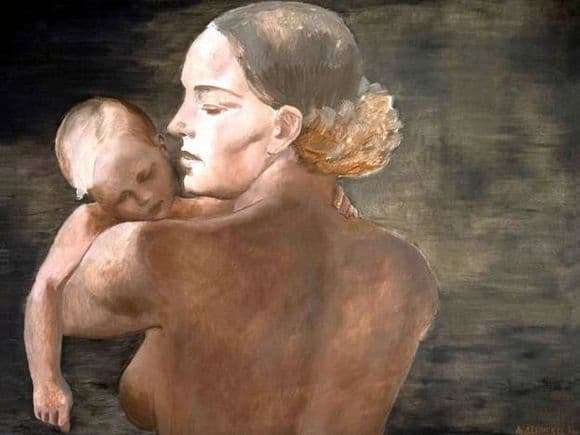 A. A. Deineka wrote the work “Mother” in a difficult time for the country. It was during the war years that a person completely overestimated life and for him native people become more important.

The artist depicted the mother’s image severely and even roughly. It cannot be said that the painter depicted a particular woman, he created an image of a certain type. The painting depicts a woman with a baby in her arms. The child sleeps, embracing his mother with one hand behind the neck, and the other arm hangs helplessly.

The woman is depicted on a neutral background, not at all vividly, and at first glance one can overlook the frankness of this scene. The heroine of the work is naked and, having a closer look, you can see her naked chest. The artist depicted the image of the mother completely independent of the specific conditions of life or everyday situation.

The mother is observed as such, she is not just naked, her feelings and emotions are naked. This is not a staged shot, this woman displays the general condition of all women who have experienced the joy of motherhood.

The painter dimly depicted this boundless feeling, only on his face one can barely catch the intertwining of maternal emotions. She turned her head to the child and carefully looks at him; in the expression of her face one can read the depth of her care and love. This is a strong woman and her strength lies precisely in motherhood.

The birth of a child tempers a woman and she is vehemently ready to guard her child’s sleep. The child in the arms of a woman seems so fragile and defenseless.

The lack of clothes symbolizes the purity of feelings, the absence of any obstacles in their manifestation. This is pure motherhood in all its manifestations.

It creates a feeling of closeness and unity of the child and mother. This is a cosmic continuous connection, which is understandable only to two people, and the hand of an infant hugging mom, and her soft gaze, all speak of tenderness and develop into infinity of feelings, emotions and love.