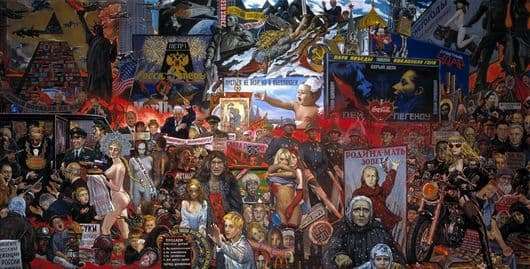 Ilya Glazunov is a Russian artist who combines realism and symbolism in his work. His paintings impress the viewer with the enormous size and straightforwardness depicted on them.

“The market of our democracy” is the largest picture of Glazunov. The viewer is surprised by its compositional complexity and abundance of characters. Written in 1999, the picture is the most ideological in all the works of the artist.

Creation shows the thoughts of ordinary people living in Russia of the post-Soviet period. An artist with pain and rage boldly collects on one canvas all the iniquity and abomination of the end of the century. The nightmare for the artist is depravity and venality, reigning at that difficult time.

As conceived by Glazunov, the picture sums up the rule of Boris Yeltsin. Yeltsin himself is shown on a canvas with a baton. He is still trying to rule the people depicted around him. Glazunov chose not to make Yeltsin the center of the composition, but depicts him from the side, among many other figures. The artist wants to show that the organizer of what is happening in the picture is the person with the baton. Many attributes of Western culture on the canvas speak of Yeltsin’s belief in the American dream, which was never realized for anyone.

In the lower right corner, Glazunov portrays himself with a poster on his neck, asking “Where are you, Russia’s true sons,” hinting at the fact that only he is loyal to Russia on the canvas. Various posters with requests and announcements of very provocative political content are full of canvas on canvas.