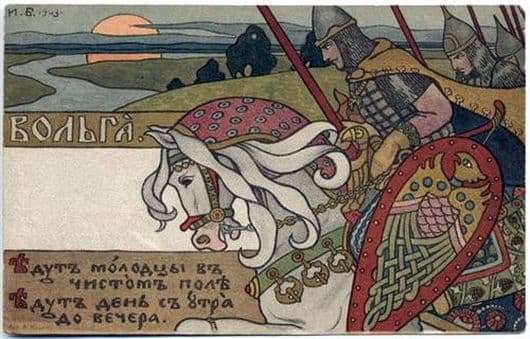 Bilibin constantly to illustrate all sorts of epics and legends. “Illustration to the epic by Volga” is made in an ornamental graphic-decorative design, which is completely based on the motifs of the epics and legends of the Russian people.

The illustration is made with ink painted with watercolor, while it is worth noting that Bilibin was able to work out his own unique style, for which the patterns and ornaments of ancient Russian culture became basic. So in this work, you can see the skillful painting of the shield, horse cart and elements of clothing of the ancient Russian hero. At the same time, ornamental riches are amazing, and even a certain number of years later remain relevant, despite the large number of reprints.

The illustration shows a whole army of Russian valiant warriors, their eyes are full of determination, and the hand will not falter at a crucial moment. They advance at dawn to defend their land from invaders. The warriors, “everyone is equal, as to selection”, are very strong, bold, inspired, as they come out in defense of their families, wives and children.

In general, the image of the Russian people is very important for the master, whether it is a protector or a peasant, and the artist has a special respect for the latter. The master also focuses his attention on the boundless Russian lands, in this case it is a field that personifies not only Russian lands, but also bread, which is cultivated in the form of wheat.

The horse on which the rider sits is also quite powerful, but not aggressive, and its white color is also not a mere coincidence, so the master confirms the purity of intentions. It is very interesting to use the general composition, in which the picture is divided in equal parts, on one side there are soldiers, and on the other there is Russian land.