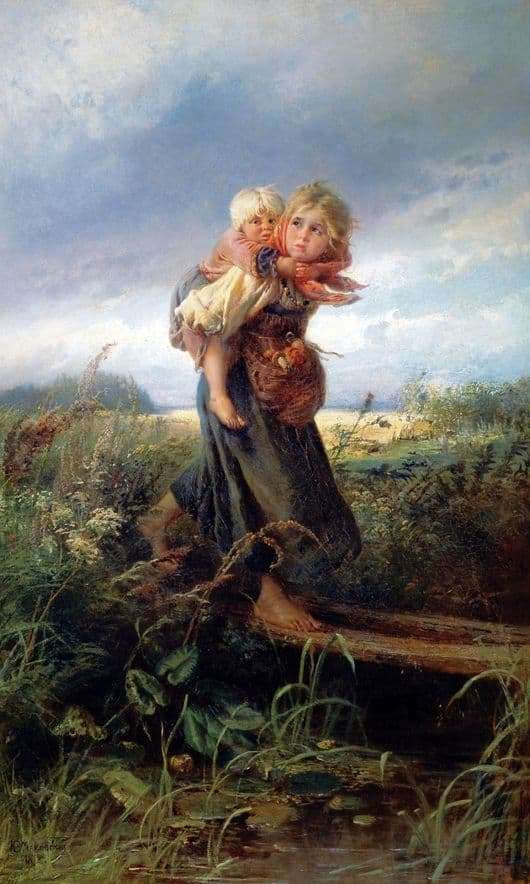 The canvas depicts children who decided to go for the mushrooms, but they were suddenly overtaken by a thunderstorm. The picture of the parameters is large, however, to describe it in large numbers of words simply will not succeed. But it is not in the natural phenomenon that matters, but in children, rather in their emotions and experiences, in their fear and desire to find shelter or shelter in order to avoid rain. Everything suggests that children from a simple peasant family, because their cheeks are pink, their braids are blond, their eyes are deep and large.

Behind the children one can see a dark forest from which they flee, under the feet of the eldest girl a shaky bridge, but without fear of losing balance, she rushes forward, holding her sister tightly, the same frightened and hoping for a miracle. Everything around says that a thunderstorm is approaching: grass, bent to the ground, disheveled hair in children. The gloomy pre-storm sky a little forces the atmosphere, and children become terribly sorry. The little sister of a girl of about ten on the back of fear very tightly pressed, which shows how tightly she holds her sister’s neck.

Despite the face distorted by fear, the children have clean and cute, kind eyes, little things make you admire the picture – these are mushrooms in a basket, clearly defined grass, bare feet of children, and a sense of bad weather, and the sky, which is about to change its color and the sunny day will dry up. But not so much the older girl is afraid of thunderstorms, but of the fact that the youngest can be frightened. Therefore, running from all feet, not looking at what is happening behind. She dared and stubbornly, with decisive actions, is rapidly rushing forward, proudly carrying her sister to the shelter. Still gold bullion lies the grass, bathed in sunlight,