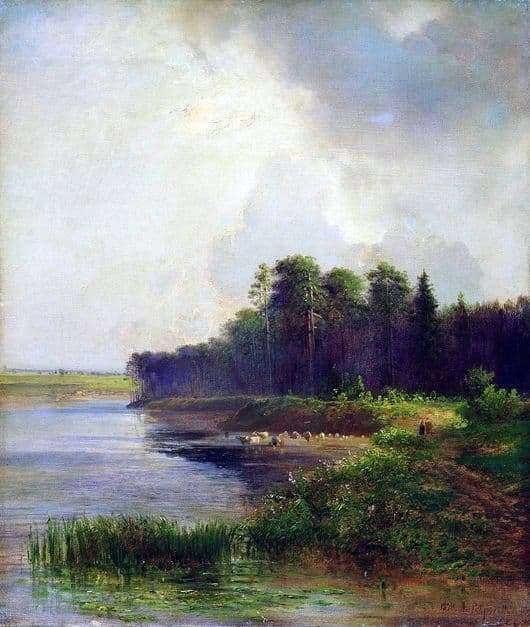 Savrasov amazing landscape painter. It would seem that this is depicted on the canvas? Just something bank of the river, which is open to the open, but a little further begins a mixed forest. And just where the river seemed to open, a herd of cows appeared on its bank and descended to the water itself, to a watering place. And very close to the shepherds, they make sure that all the cows are drunk, and then again drive to the pasture. This is actually the whole event of the canvas, but… The main nature in the landscape. But here it is interestingly presented.

At the very front edge of a juicy green grass on the ground and in the water. And the forest is presented to us as something dark, brown, only the tops of the ever-green Christmas trees remained in their natural color. Only the top is green, but below everything is dark. And of course, the sky.

Stunningly traced the sky, with clouds, where possible rain is

hidden. Maybe because the shepherds are a bit in a hurry and want to quickly move the flock to the road, so that they can return to the village. May be so. Well, the river here is not the last in the landscape – it is not big and not small, its flow is not too strong, but the blue of the water is amazing. True, the river is already overgrown with grass and mud, and this at least leads to a swamp state. And the banks of the river are almost steep – this is also a hint of a quick shallowing, although it is not a fact that this is exactly what will happen.

It is necessary to remind that Savrasov was the first to become a masterful landscape painter. He first began to paint landscapes, without exaggerating the importance of something…

Just a landscape with its own history. Then there were others – Shishkin, Kuindzhi, and so on… And he first began to paint precisely Russian landscapes, to describe the Russian land. Of course, the rest were drawn up to its level, but it should be noted that the same Kuinji still better described the lands of Little Russia and Ukraine. Shishkin and Levitan equally managed landscapes, both of our open spaces, and Italian. And Savrasov remained faithful to Russian landscapes until the end of his life. And this canvas is considered his best landscape.