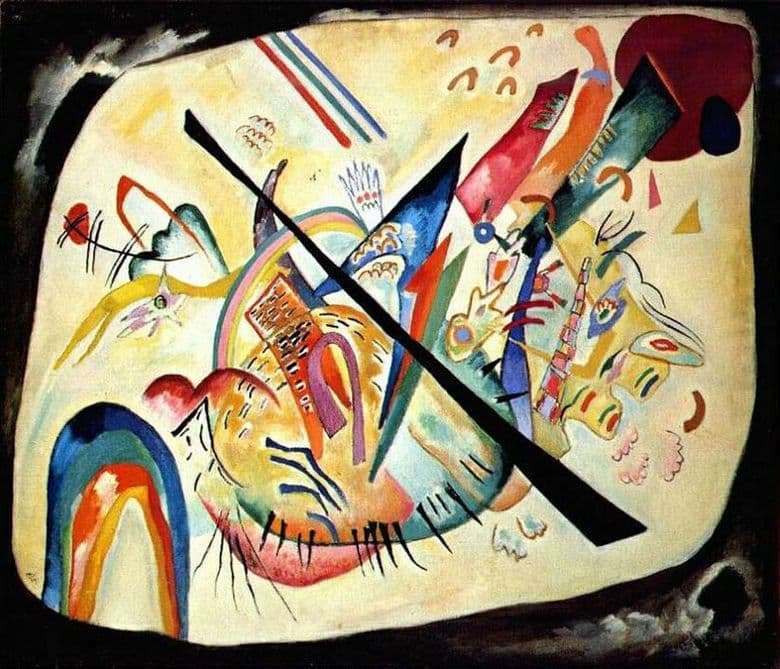 The picture is painted in oil on canvas in 1919, at the dawn of the creative path of Wassily Kandinsky. Art critics compare the “White Oval” with the music embodied in the picture, imbued with the author’s state of mind, his deepest feelings. This opinion is justified, because the artist really considered his work as a tandem of color and music. With each of his works, Kandinsky tried to arouse in the viewer a feeling commensurate with the feelings that arose from listening to a musical work.

This image is the key to the artist, as a visual reflection of the transition from abstract impressionism to systematized rational abstract art.

An oval of imperfect form is depicted on a black as if marble background. Background plays a special role, highlighting and complementing the plot. If you look at it from the other side, an image of a certain screen is created in which the composition is formed. Each form of composition is represented as a spatial perspective. Created the effect of “paintings in the picture.” The composition is based on a black axis, around which other components of the picture are grouped. The axis, as if overlapping the rest of the elements, goes to the primary plan.

The black lines located along the diagonal give a balance to all elements that are oppositely directed.

If you take the “White Oval” with a general view, then an association with outlines resembling the human heart arises. The element of the composition, located in the lower left corner, stretched upwards, is similar to the phalanx of the finger of a hand, with which someone wants to touch a vital organ.

The forms of Kandinsky’s work are symbolic. The master opens the world an objective and intellectual position, expressing his attitude towards the revolution and civil war in the country.