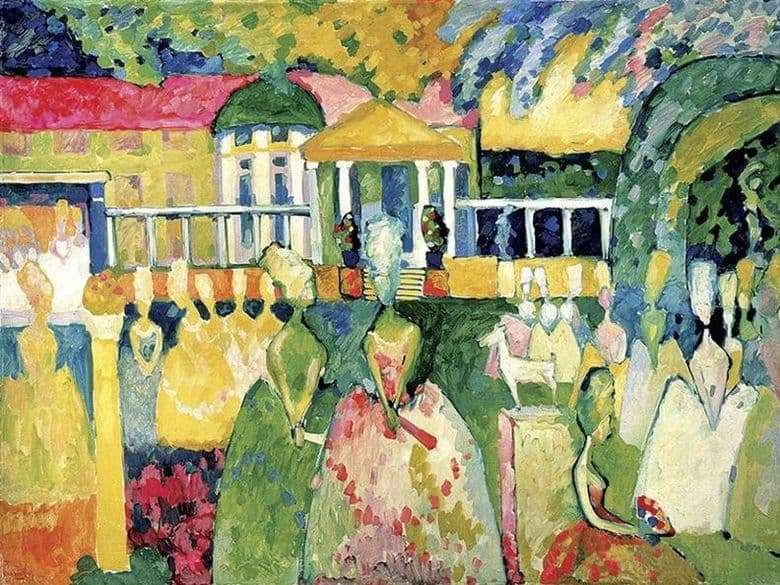 In the period from 1900 to 1910, Vasily Kandinsky worked in the magazine “World of Art”, which was engaged in the publication of Russian symbolism. The main theme for the work of the Symbolists of the time was the culture of the Russian nobility of the 17th century and the first half of the 19th century. The retrospective theme of the image is connected with this.

“Ladies in crinoline” is written in oil on canvas. The picture is planar, fragmentary with a predominance of rhythm and plastics. “Ladies in crinoline” is the brightest of the works of Kandinsky on the subject of the nobility. The work combines an impressionistic understanding of color as the result of a certain intensity of illumination. Thanks to this, the master tried to convey to the viewer the spirit of a bygone life. The product is perceived as a desire for decorative and monumental generalization, which is characteristic of

modernity. The picture does not have a definite plot, which is characteristic of symbolism. The subject matter of the work is dissolved in the plastic of the painting. The resurrected world of the nobility, written with lyrical and ironic intonation, which is seen in the “toy” images.

The artist freely plays with color spots, dots and lines, since he believed that the colorful consonance of rhythms expresses the inner spiritual content. The color composition presented from yellow to red, reaching a red-orange tone, represents the maximum brightness of the sunlight. With the presented composition, the artist gives the viewer active warm energy. Thanks to the color play, the solemn orange tone turns into a proud shade, giving the outer splendor. With its color image is similar to the folklore, but at the same time modern, permeated with romanticism.

At the heart of the composition, the artist laid the rhythm of the arrangement of figures, not taking into account the storyline. Blurred, fuzzy images appear as a memory of noble life.