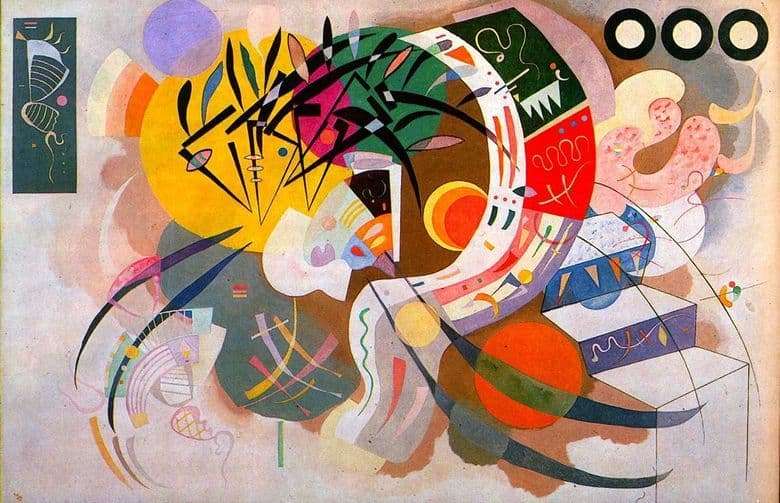 Wassily Kandinsky is known worldwide as one of the founders of abstractionism. Parents saw their son a lawyer, and he obediently entered Moscow University. Everything was changed by the Impressionist exhibition, to which Vasily got – at thirty years old he decides to change his life abruptly and become an artist. To learn the skill of the artist a young man goes to London. Already the first works of Kandinsky were significantly different from everything his teachers got used to. The form was not yet abstract and conditional, but the bright “acidic” colors caused misunderstanding and discontent of the old masters. The artist’s creativity developed rapidly, but at first it was quite difficult to see the creator of a new genre in him – it seemed to academics

Gradually, in Kandinsky’s paintings, colored lines and spots supplant real objects and human figures. Images are becoming more schematic, primitive; the idea of ​​non-objective art itself fascinated the artist, but he did not have the courage to take the last step towards absolute abstraction. One evening, in his workshop, Vasily dreamed of a perfect, perfect canvas; the canvas was leaning against the wall and at dusk it seemed unrealistically beautiful, striking with incredible combinations of color spots. A minute later, the artist realized that this was his own painting turned upside down. At that moment, Kandinsky realized that a combination of lines and spots could make the deepest impression and be extremely emotional.

The painting “Dominant curve” – ​​one of the most striking and characteristic in the artist. It traces the influence of surrealism. Along with the geometrical forms customary for abstract art, on this canvas Kandinsky introduces some bright biomorphic objects and images. The artist believed that every work of art is a thing in itself that does not require an understanding of the audience, and, as if in confirmation of this thought, endlessly experimented with form and color.

The multi-colored “dominant curve” in this picture is made mainly of red and green paint. To her left are large yellow and green circles, absolutely unexpectedly giving a kind of dark crimson hue at the junction. In the upper right corner there are ideal forms of black and white circles resembling gramophone records. In the lower right corner there are cubic forms of a blue-white staircase. The remaining details of the picture seem to be of biological origin; pink and white rounds that look like crustacean claws; two multi-colored formations resembling a human profile; black and dark green elements, in appearance – the stems and leaves of plants. At the moment the picture is in the Guggenheim Museum in New York.