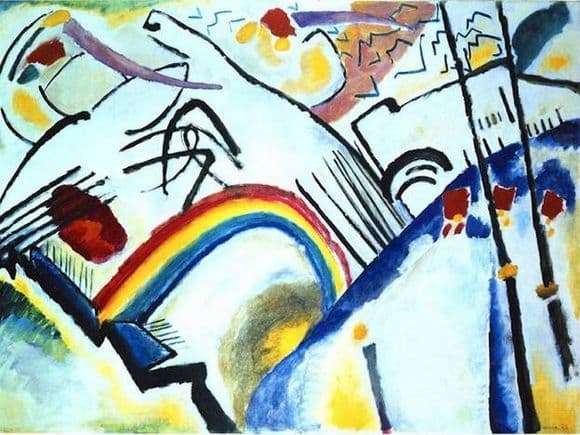 The name of the painting by the Russian artist, one of the founders of such a direction in painting as abstract art, Vasily Kandinsky was not taken from the air at all, but based on real events: during the First Russian Revolution, the Cossacks solemnly moved into Moscow. Impressed by this entry, the artist created this canvas.

Like most abstract works, at first glance it seems that the picture depicts a set of incomprehensible lines, shapes and colors. However, this is not the case, the painter has everything in its place.

Here we really see five Cossacks. Above left, two riding horses with swords. Below, on the right, against the background of a blue hill, three more in red papakhakh. Two of them hold black peaks, raised up, the third – blue saber (sword), dropping it down. Men look noble and important.

Colors play a special role in the picture. A lot of white and blue personifies life, novelty, rebirth, tranquility. At the same time, the presence of black talks about tragedies, about death (which inevitably arose from bloody revolutions). Red color can symbolize both courage and courage of male Cossack warriors, and blood – as a continuation of black.

In abstraction, lines are always crucial. The Kandinsky horizontal is a weakness, cowardice, fear; verticals are, on the contrary, courage, fearlessness, courage, patriotism, strength…

Summarizing the above, it should be said that the artist, applying strokes one after another, created this picture easily, freely and even slightly casually, without pretentiousness, without too much gloss. The viewer, looking at the “Cossacks”, feels this lightness, freedom embraces his being, and he becomes an unwitting participant in the events depicted on the canvas.