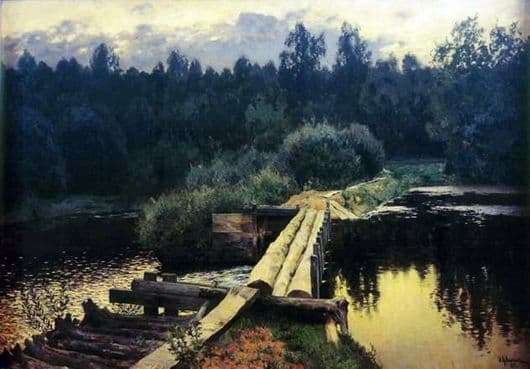 The canvas “At the Whirlpool” was painted by Isaac Levitan in 1892. This picture is the property of the State Tretyakov Gallery. Many people call this painting gloomy and sad, full of anxiety and hidden despair.

According to critics of the clouds, ascending to the overcast sky, and the setting sun symbolizes the seal and the depressive state of the author. Attributes to the picture are mystical and mysterious due to the narrow, hidden twilight, spreading forests. They seem to be stepping on the viewer and, if not for a shaky bridge, they are ready to devour it with their dark, cold foliage. Spherical bushes got too close to the crossing and began to slowly go down to the river.

The bridge looks very symbolic, it divides the canvas into two parts in the center in the vertical direction and attracts attention. Not immediately noticeable, but on both sides of the wooden ford, the picture is very different. Down on the left you can see the restless waters, dotted with a mass of small waves, the wind or a strong current of moisture is literally speckled with irregularities. Immediately on the left, closer to the viewer is a dark wooden road, which cuts off at the pool.

On the right – a completely different picture. The water is smooth and smooth as a taut drum, the glance glides over the fertile ground overgrown with lush grass that ends at the bridge. It would seem that after all, only three logs separate these two parts, but the nature of nature changes dramatically. As if the thin bridge passes between two worlds, life calms down in this deaf place and the viewer himself can choose which way to go: calm and sunny or hard and exciting.

The choice is multifaceted. No wonder, Levitan draws exactly three logs as a border. This is true Christian symbolism. Perhaps the artist thus says that any choice, after all, is predetermined.