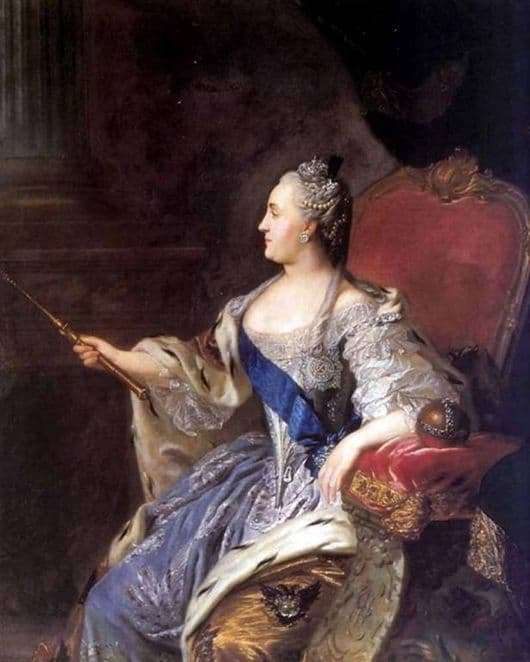 The portrait of the most famous of the Russian empresses, Catherine II, was painted by adjunct painter Fedor Rokotov in 1763, when coronation ceremonies were held about the sovereign’s accession to the Russian throne.

Despite his relatively young age, Rokotov was already a fairly well-known artist by that time, and the highest order was Another evidence of the recognition of his talent. For writing a portrait of the Empress posed for Rokotov in Peterhof.

For Rokotov, a student of the court Elizabethan painter Pietro Rotary, is characterized by diligence and the ability to grasp the nature. The composition of the canvas is built around the profile rotation of the figure sitting in the chair. On ceremonial portraits such a technique is not very common.

Part of the reason for the unusual portrait – in the unusualness of the Empress herself, in the formation of new ideals. At the beginning of the board, she was fascinated by the newest philosophical ideas, and she actively corresponded with the French Enlightening Encyclopedists – Didro, Voltaire, and a number of others. The Empress gestures to the interlocutor, invisible to the viewer of the picture.

The rest of the composition is quite traditional. In the picture there are all the imperial regalia, common for ceremonial portraits. Solemnity to the portrait is given by a standard ceremonial background – a column and draperies. And, of course, the empress herself, with perfect posture, developed over the years, and a polished profile. The portrait is both dynamic, lively and majestic.

The empress herself considered the portrait written by Fedor Rokotov to be one of her most successful images. Over the following decades, the picture was repeatedly copied, both by the author himself and by numerous imitators and followers. There are both exact copies and repetitions of the portrait, as well as containing minor changes in accessories.