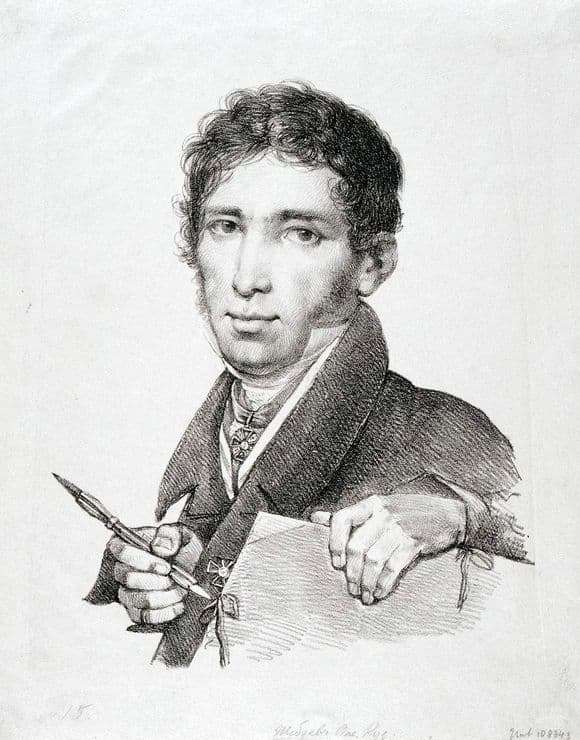 Shebuev is a Russian painter who, of all styles, preferred academicism and classicism, who paid tribute to the manner of writing classics and did not even experiment with cubism or impressionism.

The themes that he chose for his paintings are quite typical for this approach – namely, historical and genre scenes, periodically from deviations to religious or mythological subjects. For his paintings are characterized by detail, monumentality and scope inherent in classicism.

A lot of characters, several subtle words, separate scenes, united by a common plot in one epic canvas – all this is normal for him. However, when it comes to his own self-portrait, Shebuev approaches the matter with surprising carelessness. In fact, his self-portrait is a pencil sketch, made very talented and neat, worked out, but still devoid of background and color.

On it the artist is depicted in his youth – curly, with a long narrow face, with a slight half-smile on his lips and a kind look, he looks like a student who goes to couples to the institute, and who sincerely loves his work.

The impression is enhanced by a folder with draws – most likely, there are drawings in it, and this stroke complements the portrait, makes it more voluminous. Shebuev has a pen in his right hand, he holds a folder with his left and looks frivolous, cheerful, satisfied with life. Self-portrait is comprehensively distant from both classicism and academism, which is characterized by a certain grandeur and solemnity in the depiction of a person.

In his self-portrait, Shebuev rather conveys his own character, catches a meaningful expression of his face, rather than striving to appear serious and strict. There is in it something of self-irony, of the ability to appear before the public, not only with a full parade, but also the way you really are.

And this is good, because you get a portrait of the artist, and not an empty calm mask from his face.