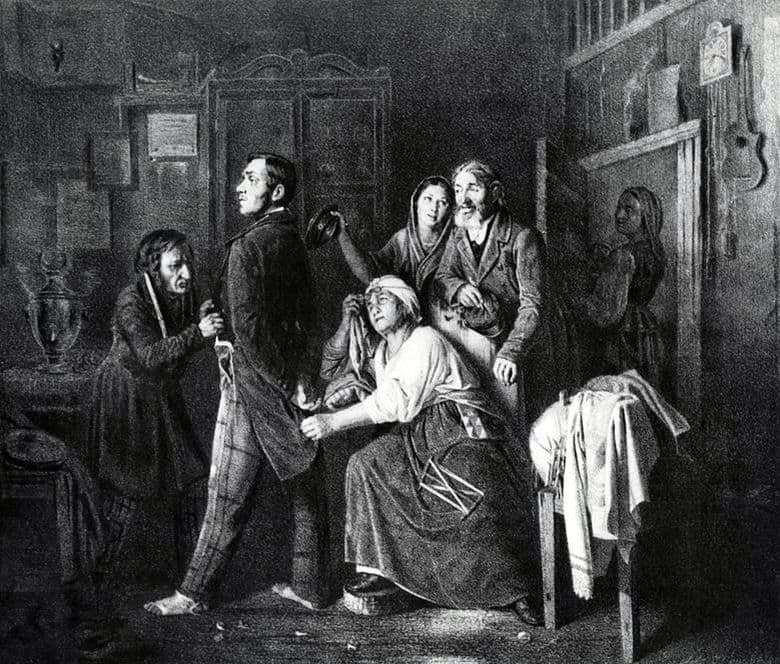 The popular student work “First rank. Son of a deacon, made in collegiate registrars” brought Vasily Perov in 1860 a rather significant reward for him. The work is presented in the genre of a certain satire on the newly minted officials, which has a special meaning that is relevant to the present.

Having started to study the picture, we see an ordinary room with pictures and a clock on the wall, in the corner are icons, there is a samovar on the table. Morning bustle dilutes all this routine, because the deacon’s son received the rank of a collegiate registrar and a tailor with a new uniform came to do this to try on. The whole accent of the picture lies in the facial expression of the main character. He stands, proudly lifting his head and putting his foot forward, however, Perov depicts his sock full of holes to show how fast a person is changing, having received even a slight increase.

In the background we see a mother and father, who are so happy with the happiness that their son has gone the right way and are already presenting how a new luxurious life awaits him, a bride from a rich family, high ranks and expensive gifts from subordinates will be in wives. The image of the protagonist is taken from the life of the author, he was a neighbor’s deacon, and in the tailor depicted in the picture, the comrades recognized the tailor who sheathed them in the school.

Vasily Perov vividly showed in his picture “The First Rule” as a person who is still barefoot and all tattered, very quickly began to conceive and feel the power of the new title. The artist so accurately conveyed this moment of fitting, having thought through every element of the interior, that it seems as if we knew the life of the characters before the changes in their lives and we can already guess the future future. The picture as if comes to life and turns into a story filled with existing reality.