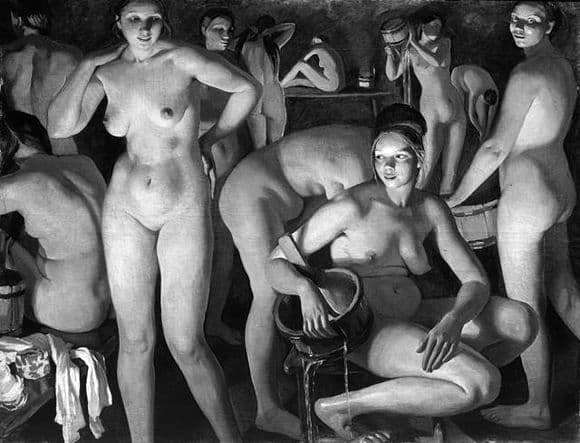 Zinaida Serebryakova, nee Lancere, was born into the family of a famous Russian sculptor. For a long time the estate of her family was the center of the artistic life of St. Petersburg. The ability to painting manifested itself in the girl’s years of study at the female gymnasium, she later continued her education at an art school, and when she got married, she left for France and already there honed her skills in writing portraits.

The painting “Bath” was painted by the artist in 1913. Dozens of sketches were created to paint the picture, many of which are still kept in the storerooms of museums. When creating the canvas, the most monumental style that was used by the artist in earlier works, and manifested with particular tension and purity, was most clearly manifested. To paint a picture, golden hues are used to emphasize the tanning, sculptural and plastic characteristics of the female body.

Most of the paintings are occupied by naked female bodies. Women are not at all embarrassed by their nakedness, they perform a quite familiar and even ordinary process of ablution. There is nothing mysterious and forbidden in this, but there is something attractive.

Following the traditions of Venetsianov, the artist does not seek to hide the natural shortcomings, but does not emphasize them either. With her usual love of writing portraits, she pays special attention to every line of the female body. The perfection of the details presented was appreciated by foreign and Russian critics. In 1913, the painting “Bath” became part of the exhibition “World of Art”.

Many critics believed that neither before nor after Serebryakova, there was no artist in Russian painting who was able to so naturally and simply convey the beauty of a female figure. The picture is devoid of any vulgarity; it conveys life and female beauty in the way that nature created it.