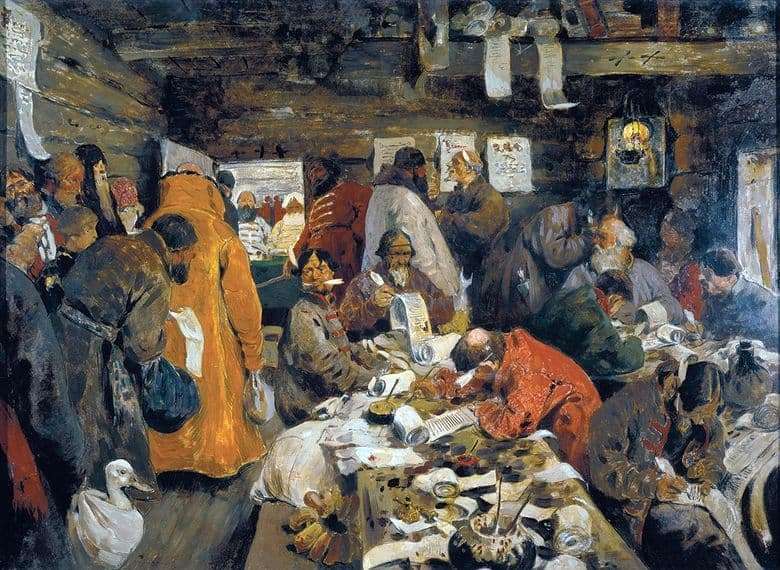 The picture clearly tells us about the work of the mandative system of the 17th century. From early morning in the orders on Ivanovskaya Square there was already a queue from the most different strata of that society, each of which came with his own request.

In the picture, they crowded along the wall, waiting for the judge to be released. The judge is sitting in the center of the table, apparently busy with another case. Assistants sit next to them – clerks and the chief secretary of the order. There are scrolls on the table, it should be this Council Code of 1649, or the Priznaya book, the advisers should have been guided by them when deciding which questions they were addressed to.

At the door in a red caftan with gold embroidery it is important that the bailiff should be, he decides to skip the petitioner or not. The work is in full swing, the scrolls are getting longer and longer – it means the matter has dragged out, there is an “orderly red tape”. The beginning of the table catches the eye – various instruments for records lie in a heap: inkpots, columns, feathers, a pot of glue that was used to glue the sheets in order to produce scrolls, sealing wax, wax for printing, pots with red vermilion to write the first capital letter.

The confusion suggests that the workflow will not end soon, it is important to solve as many requests as possible, and the clerks do not have time. One writes on his knee, and the inkwell weighs on his neck, the second draws the letters in cursive, and the third takes a pen in his mouth talking to the one asking, the others focusing on their work, hooking the pen behind the ear. The goose in the ward, and the two men holding something in the hands of a “funeral service” (bribe), without which it was impossible to agree with the order.