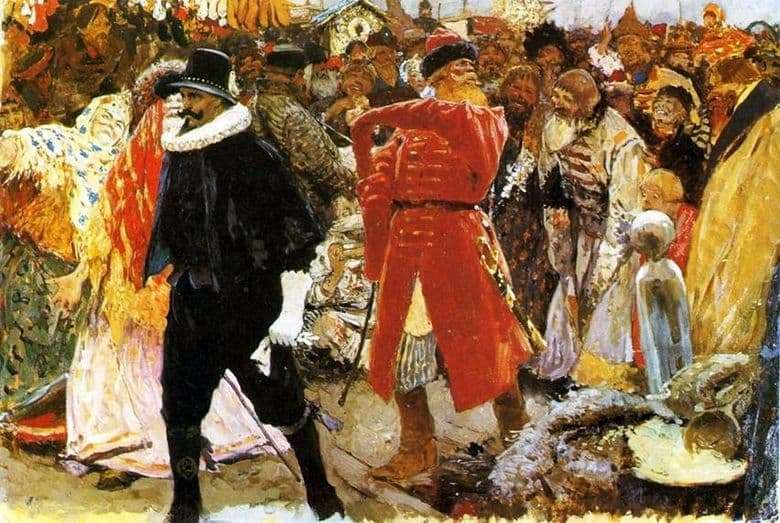 Sergey Vasilevich wrote the picture “German” shortly before his death. Written in 1910, using cardboard and oil. The picture is kept in the Odessa Art Museum. Not long before his death, the author addressed the topic of the arrival of foreigners in the capital. “German” picture made in a humorous style. At a time when foreigners were rare guests in Russia.

In ancient times, in a society established ideals and customs reigned, everything alien was strange and not understandable to the Russian people. In each case, the simple Russian people showered ridicule and abuse of foreign guests. The artist depicted the clash of two completely different cultures of nations, different worldviews and ideals. Many Muscovites feared and feared the inhabitants of the German settlement, considered it “the product of the devil himself”. But there were also those who were interested to look at a stranger. One of these scenes of fear, curiosity and distrust depicted the artist in his picture.

The painting depicts a typical scene, a visit by a foreigner to the Russian outback. The Russian people are not ready to accept the unknown. Clothing, style, behavior – everything seems to be incomprehensible and vulgar. Bright clothes, a hat, boots, all this causes laughter and disgust. The picture shows how citizens openly mock and mock the stranger, who are dressed in ridiculous and strange costumes.

The picture is painted in bright colors and very accurately conveys the atmosphere of the action in progress. The picture can rightly be considered one of the famous images of Russian painting.