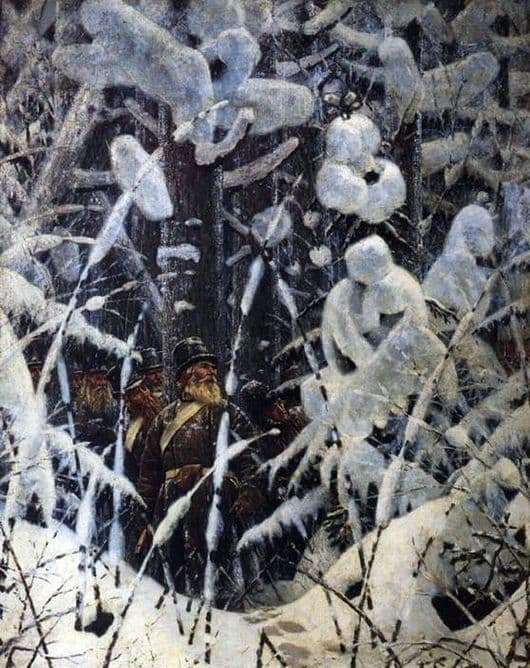 Patriotism was and will always be in vogue among artists. At least, because you can vividly express your attitude towards the Motherland. All Russian artists were quite loyal to Russia. Yes, there was a fashion to paint overseas landscapes. But rather quickly, many artists returned to their native spaces.

As for Vereshchagin, there is a special conversation here. For a long time he was considered a master of battle canvases, but still he is more of a documentary. This was particularly evident after his Turkestan series of canvases. Indeed, for the Russian Empire, Turkestan was exotic. So he showed on his canvases the life of another nation, which has its own laws and rules, its own traditions.

Vereschagin’s special theme is war. Often he returns to this difficult topic. On this canvas, he depicted the power of the people, which manifested itself in the Patriotic War of 1812. In the snowy forests of Central Russia, partisan

detachments of peasants were often organized. They acted no worse than the real army. And it was a “terrible dream” for the Napoleonic army, and much later for the fascist invaders.

What is on the canvas? First, do not immediately see the main characters. All because of the snow-covered landscape in the foreground. Vereshchagin, as it were, hid the power of the people behind the power of nature. It can be imagined that the guerrillas are standing in ambush and the enemy column is passing quite close by. But it is necessary to allow closer to him and under the cover of the winter Russian forest, they are waiting for the right moment to launch an attack.

In fact, the entire canvas is covered with a winter landscape, and only when you look closely you can find the figures of bearded men who are closely watching the French and only when the older one gives the signal of an offensive – will the battle begin.

Vereshchagin, thus, sang the spirit of the Russian people, his strength, his might and his peasant trick.