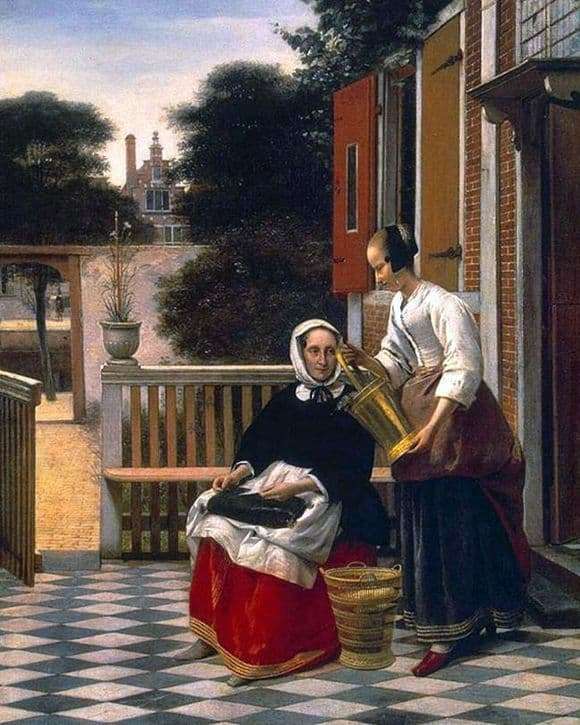 The year of creation of the most famous canvass de Hoch is unknown for certain. Most often, researchers of the Dutch painter agree that it was 1660. In his work The Hostess and the Maid, the artist writes a scene from the everyday life of the townspeople in the then Delft style.

In the nearest plan there are two medium-sized figures in full growth – the respectable age is the mistress of the house and next to her is a young woman-servant. An elderly lady sits holding items for needlework and turns an abstract look to the fish for dinner in a copper bucket brought from the market by the maid.

The unremarkable actions of the two women are shrouded in peaceful calm, measuredness and contentment of life. The peculiarity of the painter de Hoch is the ability to wonderfully work out small objects of the canvas in detail. Perfectly laid tiles in the courtyard, the cobbled ground at the exit of the gate, the bricks of the house wall, the foliage of several trees – all of this is written with amazing thoroughness. The second distinctive feature of the artist is drawing the attention of the viewer to simple things, presenting them in such a light that you are surprised at the beauty that was not seen in them before.

The basket at the feet of the old woman is shining with the sun flares, the neat vase is monumentally beautiful, even the bucket for fish shines with a golden sheen. In the atmosphere reigns well-being and cleanliness. The order is in the interior and in the dress of female figures. The hostess is in a snow-white cap and the same apron, the hem of her red skirt is trimmed with golden stripes.

The top of the dress is modest black. Maid – with a very neat hairstyle, in peeled shoes with a long toe. No less patiently worked the background. It is occupied by a barely noticeable couple walking and the tip of another beautiful Dutch house. Thus, the artist skillfully combined in the picture canvas the everyday painting genre and the urban landscape.