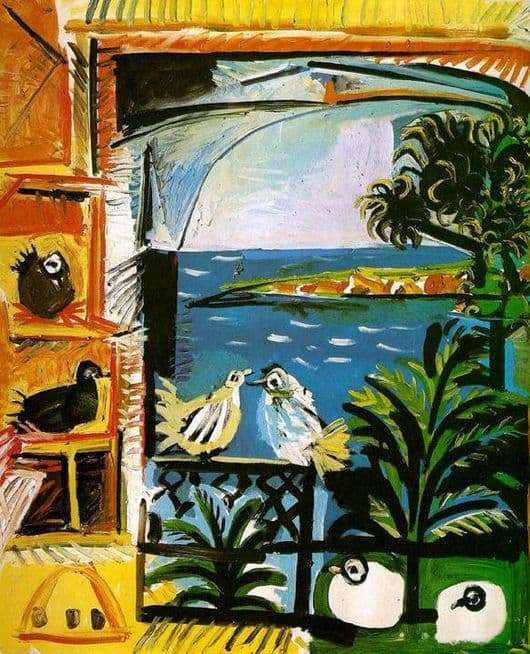 Pablo Picasso was born in Spain, worked in France, and his work belongs to the world. But not to that real, customary, tangible sense organs, but turned inside out, simplified to primitiveness, chaotic and disharmonious to the world.

Boldly violating and rudely destroying all traditions and laws, going beyond the natural proportions and accepted perspectives, Picasso’s creativity shocks, discourages, repels and fascinates. Passing along the brink of ugliness, it subtly touches the deepest, hidden from itself the strings of the human soul.

Pigeons – one of the most favorite topics of the artist. His famous dove of peace circled all the continents, and the name of the dove, in Spanish Paloma, he called his youngest daughter, who was born when the artist was almost 70 years old. Picasso knew the habits of pigeons well and was not deceived about their nobility. These are weak, stupid, exceptionally aggressive-minded birds, which do not cost anything to peck to the death of their relative.

The painting “Doves” has several options, slightly different from each other. You can see four pictures of the same name, which represent an open terrace overlooking the sea, where pigeons live. In the first embodiment, the background is well-written – a corner of the sea landscape, a small sand bar with a tree on it. Two birds are cooing on the terrace lattice, two pigeons are sitting on the grass, one more each – in niches, possibly on nests.

In the second and third variants of the paintings of pigeons are much larger, the view of the sea is obscured by overgrown plants. The fourth picture is drawn with strokes, more unrealistic than previous works. Three pigeons pecking food on the floor, three sitting in cages, another sitting on the trellis, barely marked against the sky. And what all this means, no one knows.