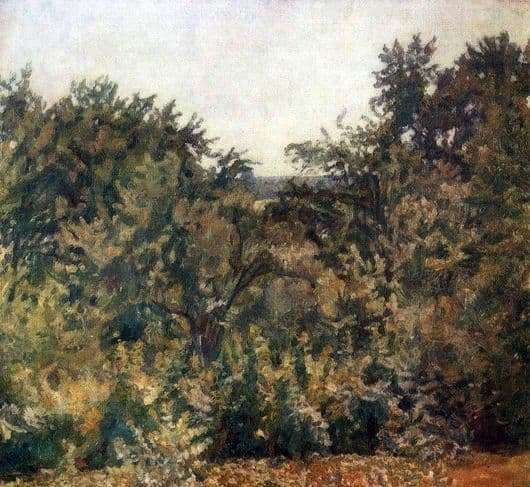 Nikolai Petrovich, according to historical facts, performed the work under the name “Orchards” at the time when he was in the Crimea. He was shocked by the scope and beauty, because it was decided to create this beautiful canvas. As it is known, thanks to the numerous works of the master, Krymov loved to convey the true beauty, whatever it was, it was the uncovered nature that always seduced the master.

The canvas is made in several traditionally green tones and shades, thanks to which there is greater realism and even in some sense dullness and scarcity, but this scarcity is in no way connected with the variety of colors, as there are plenty in this work.

The picture shows only a small part of the orchard, trees and bushes, which are arranged according to the composition, as if on the sides, thus forming a small clearance right in the center of the picture.

In this gap, a meadow is visible, at the end of which there is a woodland, which, apparently, denotes the boundaries of the garden. The branches intertwined with each other, but despite this, you can see how, during wind gusts, they bend one way or the other. On the gusts of wind, can also speak and gray and gloomy sky, which is likely to soon burst into rain, but before the calm before the storm is still far away.

The place of the review was chosen from a certain elevation, some of which fell into the picture. The riot of lush greenery can only talk about the state of mind and the emotional experience of the artist himself, which is fully reflected on the canvas.

The master was able to capture exactly the moment when nature literally flourishes with all its beauty, allowing any viewer to plunge into this atmosphere and feel it from the very beginning to the end, allowing you to enjoy it fully.